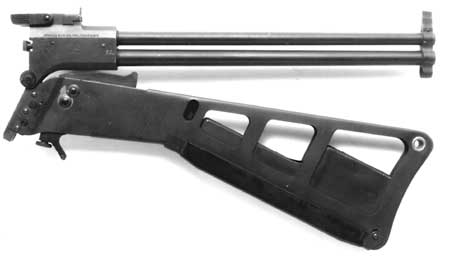 Springfield M6 Scout rifle / shotgun, as made for civilian market

M6 rifle – shotgun was originally developed during early 1950s by Ithaca Gun company for US Air Force as an aircrew survival weapon. Concept of the gun was broadly based on the Marble Game Getter combination gun, which was made in USA between 1908 and 1934. M6 survival weapon was to be used to hunt small game for food in the case of the crash landing far from populated areas. M6 rifle / shotgun survival weapon can be considered lethal against human targets at short ranges, but it was certainly not intended for anti-personnel role. It was adopted by US Air Force in around 1952, and was issued to pilots until early 1970s. Today it is obsolete and no longer is used as a military survival weapon. Until about 2004 Springfield Armory made and sold several civilian clones of the M6 USAF survival weapon, which were available in .410 / .22LR and .410 / .22WMR chamberings, with longer barrels and optional trigger guards.

M6 US Air Force survival weapon is a break-open, over-the-under dual barrel gun. Its top barrel is rifled and chambered for .22 Hornet (5.6x35R) hunting ammunition. Its bottom barrel is smooth-bore and chambered for .410 gauge 3-inch shotgun shells. Weapon features single exposed hammer with manual barrel selector (located at the top of the hammer), and large, unprotected paddle-type trigger which can be operated by gloved or wounded hand. Skeletonized metallic buttstock has an integral storage compartment for spare ammunition, which can hold four .410 shotgun shells and nine .22 Hornet cartridges under the hinged stock cover. To provide compact storage, M6 survival weapon can be easily folded around the barrel pivot pin, to be fit into carrying pouch. Standard sights include fixed front blade and flip-up L-shaped rear sight, with one setting with 25-yard zero for smoothbore barrel and another with 100-yard zero for rifled barrel.