side and front views drawing from the original patent (1984 -1987). Note that the appearance of the original design differs from the latest Jackhammer Mk3A1 shown above. 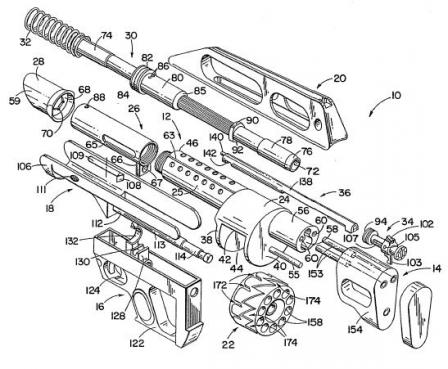 The Jackhammer automatic shotgun was developed by the US firearms designer John Andersen, who requested patents for the basic design of this shotgun in 1984. Since that time and until the late 1990s he continued to develop and improve his basic design but as far as I know failed to attract any serious buyers. In fact, only few working prototypes of the Jackhammer were ever built. Some sources stated that only two fully automatic prototypes are exist, and the Jane's Defense Library 2000 stated that the development is complete but production never began. At my opinion, the Jackhammer is a solution that still to have a question, and it possess some questionable features that can distract any serious military or police buyer. But, anyway, it is interesting design and well deserves its place both here and in the general firearms history.

The Jackhammer is a gas operated, fully automatic only shotgun. The gas system of the Jackhammer consists of the gas cylinder, formed around the movable barrel. The gas piston is formed by the collar, fixed to the barrel just ahead of the gas port that feeds the gases from the barrel into the gas cylinder. When gun is fired, the powder gases are fed into the gas cylinder and began to push the gas piston and the whole barrel to the front, against the pressure of the return spring. The return spring is located around the barrel, ahead of the gas piston. When barrel moves forward, it first disconnects itself from the chamber with fired cartridge, and then, continuing to move forward, operates the action rod that connects the barrel and the feed and firing system. The action rod reciprocates with the barrel and has two downward projections on its rear end. These projections act on the cam slots, cut on the outer surface of the cylinder that contains the ammunition. When barrel and action rod go forward, the forward projection on the action rod rotates the cylinder 12o clockwise. On the backward strike of the barrel and action rod the rear projections rotates the cylinder another 12o to align next chamber with the barrel. At the final stage of the cycle rear part of the barrel reconnects itself with fresh chamber to achieve a gas-tight connection. At the same time the rear part of the action rod engages the striker, located behind the upper chamber of the cylinder, and cocks it. If the trigger is still pulled all the way back when the reloading cycle is completed, the sear will be released automatically and gun will fire again. There is no provisions for the dedicated semi-automatic single-shot mode – due to the relatively low rate of fire the single shots can be obtained by the quick pulls on the trigger. The feed system consists of the 10 shot, revolver type detachable cylinders, named "Ammo Cassette". The cassette may have 10 chambers for more or less conventional 12 gauge shotgun shells, or may be designed like the "cap and ball" era revolver cylinders. In the latter case, each chamber is factory pre-loaded with powder, primer and a projectiles of one or another type, then hermetically sealed in the plastic film cover. Prior to load the "Ammo Cassette" into the gun, one must remove the plastic sealing and then insert the cassette. When all charges from the cassette are fired, it can be disposed of or sent to the factory for reload. The manual cocking for the first shot and the magazine replace process are controlled by the sliding forward handguard. When the handguard is pulled forward, it engages the barrel and pulls it forward and then back, to cycle the action. To remove the Ammo Cassette, one must pull the trigger half the way back (presumably with the safety engaged), and then pull the handguard forward. This will withdraw the barrel from contact with the chamber of cassette and then remove the cassette axis forward, so the ammo cassette will be free to fall out of the gun. In the forwardmost position the slide will be automatically held by the release latch, located at the front of the handguard, thus leaving the shooters' non-firing hand free to insert the fresh "cassette" into its place. As soon as the ammo cassette is in its place, the shooter must push the slide release, so the barrel and the slide will go back under the pressure of the return spring, locking the cassette in place and cocking the gun. The striker can be manually cocked or de-cocked using the cocking handle, located inside the butt. The barrel of the Jackhammer can be easily replaced by removing the muzzle cover and return spring, then rotating barrel 90o either side do disconnect if from the action rod and, finally, pulling the barrel out of the gun. The new barrel then could be dropped in and rotated 90o to engage with the action rod. Then goes the return spring and the muzzle cover. The conventional open sights are mounted within the integral carrying handle.