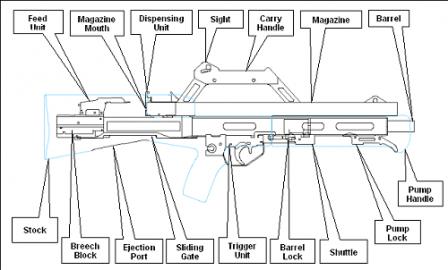 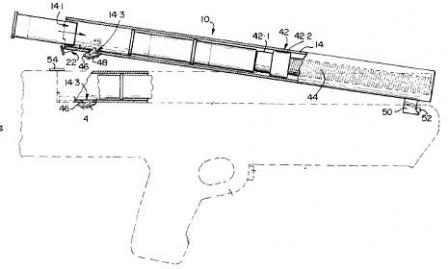 The Neostead shotgun had been designed by two South African engineers, Tony Neophytouand Wilmore Stead, in the early 1990s. They originally patented the pump-actionтshotgun with forward-sliding barrel in 1991 and then modified the design for dual feed tube magazine by the 1993 (according to their second patent application). The working pre-production prototypes appeared in the late 1990s,and production began in 2001. At the present time Neostead is in production andis marketed worldwide by the South African company Truvelo Armory. It represents a very interesting and promising design of a combat shotgun, but it's still to be seen if the Neostead will be adopted and used by any major police or military force.

TheNeostead is a manually operated, pump action shotgun with some rare (if not unique) characteristics. First of all, Neostead is built using fixed breech face and movable barrel. Assuming that the barrel is loaded with empty case, to reload the gun one must pull the slide forward, and then – backward. This will cause the barrel to go forward, leaving the spent case held against the breech face by the extractor. When barrel will clear the spent case, it will be ejected down through the opening in the gun shell. When slide is pulled all the way forward, the fresh cartridge is released and pushed back out of the magazine above the barrel, and then lowered by the feed ramp until it is aligned with the barrel and put against the breech face simultaneously. When the slide is pulled backward, it will take the barrel back, so the barrel will enclose the cartridge and finally lock itself to the fixed breech face. Now gun can be fired again by pressing the trigger. The only one other mass produced shotgun with forward-moving barrel and a fixed breech face is the Russian  RMB-93 shotgun. The second feature of the Neostead is its dual feed system. It consists of two tubular magazines, located side by side above the barrel. Cartridges are loaded into the magazines and fed from the rear. Magazines are coupled and hinged to the gun frame at the front. To load or unload the gun, magazines must be tipped up at the rear, exposing its rear openings. At the rear openings of the magazines there is a magazine selector which can be manually set to enable the feeding from one or another magazine, or from both, alternately. This dual, selective magazine system results not only in increased magazine capacity, but also offers greater tactical flexibility: for example, one magazine could be loaded with full power buckshot and the other with less lethal rubber slugs for police work. Selection of the type of the ammunition used is a matter of a second. Third feature of the Neostead is its bullpup layout, resulting in relatively long barrel and compact overall size. The shell of the Neostead is made from high strength polymer.Safety switch is located within the trigger guard, ahead of the trigger. Sights are built into the integral carrying handle.