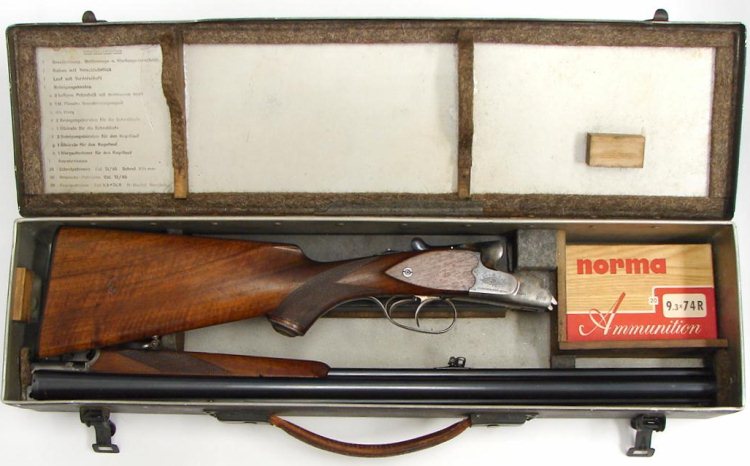 Sauer M30 drilling (“triple gun” in German, meaning triple-barrel combination rifle / shotgun) was originally developed by famous German gun making company J.P.Sauer & Sohn as all-around hunting weapon. Introduced in 1930, it was commercially available in several caliber combinations, sporting two side by side shotgun barrels (in 16 or 12 gauge) over one rifled barrel. In 1941, when Hitler’s Germany began military operations in Northern Africa, Luftwaffe (German Air Force) adopted Sauer M30 drillings as wilderness survival weapon for air crews, operating over vast North African deserts. Issued with bird shot and slug shells, as well as with powerful 9.3x74R rifle ammunition, M30 drilling was capable of bringing down almost any game, from birds and up to lions. With 12 gauge slugs or 9.3mm rifle bullets it was also more than capable of bringing down enemy personnel, although low rate of fire limited its effectiveness as a military weapon, and use of soft-point rifle bullets posed certain (possibly dire) consequences for shooter in “conventional warfare” scenarios. It must be noted that Luftwaffe bought Sauer M30 drillings outside of standard military procurement procedures, and all “Luftwaffe drillings” were made to pre-war commercial standards of fit and finish, and thus were rather expensive. Overall, Luftwaffe bought about 2,500 Sauer M30 rifle / shotgun kits, consisting of the aluminum storage / transportation chest, weapon itself, carrying sling, cleaning kit and manual.
Normally, Sauer M30 survival weapon was stored in disassembled state onboard of the aircraft in its aluminum chest, along with supply of ammunition (20 rounds of 9.3x74R rifle ammo with soft-point bullets and 45 shotguns shells, 20 with slugs and 25 with bird shot). Total weight of the package was about 15 kg / 32 lbs. In the case of crash landing, surviving crew was to retrieve the chest from aircraft, assemble the gun and take it out along with ammunition to provide food and defense against predatory animals.

Sauer M30 drilling is a triple barrel, combination rifle / shotgun with break-open action. Rifled barrel is located below the side-by-side shotgun barrels. It uses “hammerless” (internal hammers) “Blitz” lock, with all trigger and hammer parts mounted on the single bottom frame. It is equipped with two triggers. Front trigger can fire either right shotgun barrel or rifle barrel, and in the latter mode it can be used in “set mode” (Schneller). Rear trigger fires only the left shotgun barrel. Mode of the forward trigger is controlled by the selector lever, located on the tang of the gun. When pushed forward, this lever connects the front trigger to the rifled barrel hammer. To set the rifle trigger, one has to push it forward until it clicks in place. After that, only a very slight pressure is required to fire the rifle. Standard sights include typical shotgun rib with small front bead, and spring-loaded rear blade, zeroed for rifled barrel for 100-meters range. The “rifle” rear sight is automatically raised into position when trigger selector is set to fire rifled barrel.