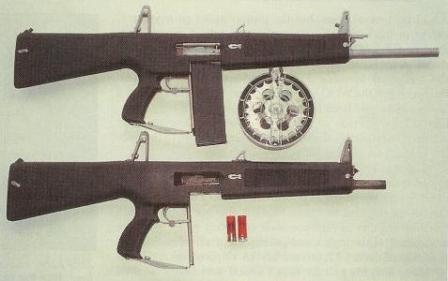 American gun designer Maxwell Atchisson developed his first selective fire shotgun, the Atchisson Assault Shotgun by 1972. This weapon was intended for close combat in environments like city streets or jungles. It was to provide tremendous short range firepower for troops during ambushes, room clearance operations and other such combat situations.

The first prototypes were rather simple in design and used certain other components of existing weapons. These were also highly unusual in that Atchisson used a most unusual (for a shotgun) method of operation – simple blowback with advanced primer ignition. This shotgun fired from an open bolt, and had a rather heavy bolt 1.4kg).

The firing pin was attached to the bolt along with the internal pivot lever that caused the firing pin to extend and ignite the cartridge just prior to full bolt closure. To reduce peak recoil and cyclic rate of fire, Atchisson used an extra-long recoil system. In this system the bolt recoils much further back after each shot than is usual in this type of weapon.

The receiver of the early Atchisson shotgun was made from steel tube, with attached M16-type buttstock and forearm. This shotgun also employed a trigger group borrowed from the Browning BAR-1918 automatic rifle, which allowed for the selection of semi-automatic or full-automatic fire from an open bolt.

Ammunition feed was from detachable magazines, either 5-round boxes or 20-round drums. To provide the necessary support for the heavy drum magazines during recoil, this gun was equipped with a magazine support bracket that rested against the pistol grip. The simplistic sights were of open type, with non-adjustable rear diopter and post front, both mounted on high bases.

During the late 1970’s and early 1980’s Atchisson reworked his basic design from open bolt blowback action to the more safe locked breech, gas operated action. This was done in view of the standard use of more powerful, especially developed military shotgun ammunition, loaded with flechettes or heavy buckshot loads. This system employed the traditional gas chamber and piston, located above the barrel, and locking system that used single vertically sliding locking lug in the bolt head. Upon closure of the bolt, this lug was forced up to lock into the projection of the barrel. Upon discharge, the gas piston forced the bolt carrier back. This in turn first lowered the locking lug to unlock the bolt, then carried the bolt back for the reloading cycle.

The new weapon retained the long travel distance of the bolt, but had a more conventional hammer-fired trigger unit. It still fired from an open bolt. The stock and receiver were also redesigned; now the receiver, shoulder stock and forearm were made as a single housing, assembled from two symmetrical units, left and right. This weapon also was selective fire, and used an M16-style safety / fire selector on the left side of receiver, above the pistol grip.

This second generation design languished for almost two decades, but recently it has been picked up by the Military Police System Co.(Tennessee, USA). This company offers the slightly modified AA-12 selective fired shotgun for authorized military and police users in the USA. It is possible that the AA-12 will be used in limited numbers by some US agencies, but so far we have no information on actual use of this awesome weapon, which traces its ancestry to the late days of the Vietnam war.