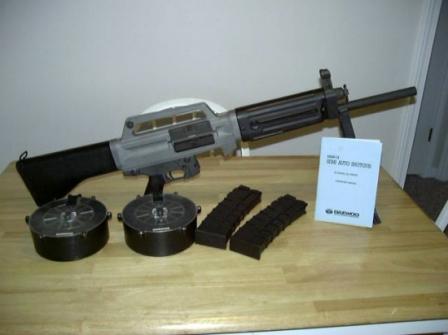 USAS-12 with accessories and magazines.

History of USAS-12 shotgun is rather interesting. Its design grew up from 1980's vintage designs of Maxwell Atchisson (see Atchisson assault shotgun). In about 1989, Gilbert Equipment Co (USA) decided to bring up the selective fired weapon, broadly based on principles, employed in Atchisson shotguns. The design of new weapon was produced by someone John Trevor Jr. Since Gilbert Equipment Co had no manufacturing capabilities, it started to look for possible manufacturers. It turned out that the only maker that agreed to produce this weapon was South Korean company Daewoo Precision Industries, a part of high-tech DAEWOO conglomerate. Daewoo engineers adopted the new weapon to their manufacturing techniques, and mass production commenced during early 1990s. This gun sold well to military and security forces of several (unspecified) countries in Asia, and more than 30 000 of USAS-12 shotguns were made by mid-1990s. During the same time frame Gilbert equipment Co tried to bring semi-automatic version of USAS-12 to US market, but BATF promptly classified this weapon as "having no sporting purpose", so it became "Class III destructive device" under US 1934 Gun Control Act. This greatly restricted its civilian use. During late 1990s, RAMO Defence Co began to assemble USAS-12 shotguns from Korean and US-made parts for sale on domestic market, but then again, sales of this weapon were limited to government agencies only. Today, this gun is generally not available in USA, but it is probably still is being manufactured by Daewoo in Korea.

USAS-12 is a gas operated, selective fire weapon. It uses a gas system located above the barrel, with more or less conventional rotating bolt locking. The interesting feature, borrowed from Atchisson designs, is the long bolt over travel, which results in relatively low peak recoil and low rate of fire, which is essential for weapon firing powerful 12 gauge shells. USAS-12 is an ambidextrous weapon, having two ejection ports on each side of the receiver, and two slots on the forearm for cocking handle. The ejector on the bolt and the cocking handle could be easily set too perate either side of the gun, depending on the present shooter needs and preferences. USAS-12 is feed from large capacity box or drum magazines, holding 10 and 20 rounds respectively (there are some sources that indicate that earlier versions of the USAS-12 were imported into USA with 12 and 28 rounds magazines).The polymer buttstock is hollow and is used as a space for bolt group to recoil,so the folding butt version is unavailable for this design. USAS-12 has a post type, hooded front sight at the top of the gas chamber and an adjustable rear sight built into the carrying handle, similar to one found on M16 assault rifles.