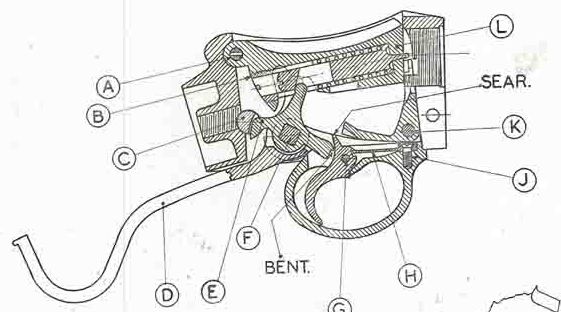 diagram of the Greener-improved Martiny action, as used in Greener police guns

The Greener police shotgun is one of most unusual fighting shotguns which were employed by law enforcement organizations throughout former British empire. Despite its obsolete design (which traces its roots as far back as 1860s) Greener police gun can be still encountered in hands of police officers in some more remote parts of the world, mostly in Asia and Africa.

Story of the Greener police gun began shortly after the WW1, when British colonial police forces requested a weapon, suitable for riot control and prison guard duty. Another request was that the gun should use proprietary ammunition, not available through commercial channels. This was requested to made illegal use of guns, stolen or taken away from police more complicated for criminals. This request was fullfilled by famous British gunmaker W.W. Greener, who developed a single-shot shotgun, based on the long-obsolete but rugged Martiny single-shot action. This new gun fired proprietary 14 gauge shells, loaded with shot, and featured very rugged wooden full stock with steel nose cap and buttplate, so it can be safely and routinely used not only as a gun, but also as a club, banging doors and occasional hot heads in the course of upkeeping the law and order.

Greener police gun mark I appeared in around 1921, and tens of thousands were delivered to organisations like Egyptean colonial police etc. However, it was soon discovered that criminals, who managed to get hold on Greener guns, used standard 16 gauge shells, tightly wrapped into paper or tape to fire from Greener guns. To made commercial ammunition completely unusable, Greener responded with improved design, Greener police gun mark III. This gun used proprietary ammunition with bottlenecked case made of brass, with thick rim. Base of the case was roughly same as standard 12 gauge case, but toward the forward end of the shell it has reduced diameter equivalent to 14 gauge shell size. To further complicate illegal use of its police shotgun, Greener provided its Mark III guns with trident-shaped strikers. Greener police shells had grooved base and recessed primers, and attempt to fire any commercially available shell from Greener gun would fail every time as the side projections of the striker would hit the flat base of the shell, stopping the central part (the firing pin itself) before it can reach the primer. Some Greener Mark III police guns were also made to fire standard, commercially available 12 gauge ammunition or Mark I 14 gauge straight case ammunition.

Typical 14 Gauge cartridges available for Greener police gun were usually loaded by Kynoch with 30-36 gram of lead shot of small or medium size.

The Greener police shot gun Mark III is a single shot weapon. It uses Martiny type hinged block action, controleld by a lever located below the stock. Pulling the lever down and forward will rotate (drop) the front of breechblock down, exposing the chamber and extracting the fired shell. Fresh round then can be chambered and breech block raised by pulling the lever up. Gun is striker fired, and internal striker is cocked automatically as the breech block is opened. Manual safety is provided on the right side of the receiver. Greener police shot gun is fitted into two-piece wooden stock of solid construction, with steel nose cap and steel buttplate. On some Greener guns, nose cap was provided with bayonet mount, to achieve more intimidating effect on rioters or prisoners.