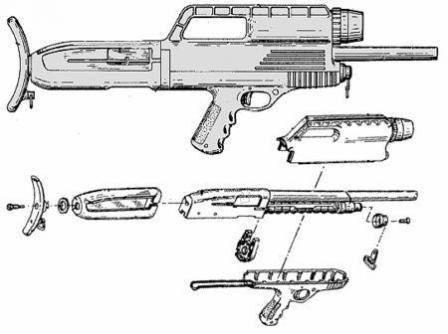 High Standard HS-10A shotgun – a drawing from the original High Standard patent(filed in 1968 and issued in 1970).

The HS model 10A shotgun.

The HS model 10B shotgun with the flashlight attached and carrying handle raised.

The HS model 10B shotgun with the flashlight removed and carrying handle folded.

The basic idea of the bullpup stock for the semi-automatic shotgun was devised by the US police sergeant Alfred Crouch circa 1957. He developed a "device for firing the shotgun single handed" around a Remington 11-48 autoloading shotgun, and began to offer it to various shotgun manufacturers. His 'device' was built from the shotgun, stripped from its stock, and a hand-made aluminum bull-pup type stock with the pistol grip and a rotating buttplate, attached to the rear part of the shotgun receiver. The trigger was linked to the sear by the long sliding bar. He finally sold his design to the US company High Standard circa 1965,which redesigned the Crouch stock, replacing the single aluminum stock with the plastic shell, assembled from three parts, with integral carrying handle at the top. The carrying handle served as a sighting rib and as a mounting for the built-in flashlight. The heart of the system was the gas operated, self-loading High Standard Flite King shotgun, stripped from its conventional stock and enclosed in the patented plastic bullpup shell. The first production shotguns of this design, designated as HS model 10A, appeared circa 1967. In the 1970 the High Standard improved the basic design. The integral carrying handle was replaced with the folding one, the separate front and rear sights were added,the cocking handle was doubled on the left side of the gun, the flash-light mount was made detachable. This model was designated as the HS model 10B shotgun. Both models were originally sold only to the law enforcement agencies and other such users, but latter found its way to the civilian market as a police surplus and trade-ins. While being very promising in theory, the HS 10 shotguns were known for inadequate (if not marginal) reliability, especially with the non-magnum loads. The relatively low magazine capacity of only 4 rounds also was a minus. Initially HS 10 shotguns found some popularity among the US police departments, but latter were quickly retired from active duty.

Technical description.
The basic action of the model 10 is the High Standard Flite King semi-automatic gas-operated shotgun, with the annual gas piston located around the magazine tube, under the barrel, and the tilting bolt locking. The return spring is located just behind the gas piston, around the magazine tube, allowing for the bullpup configuration. The tubular magazine can be loaded by single rounds via the opening at the bottom of the receiver, the spent cases are ejected via the port at the right side of the receiver.

The gun housing is made from strong plastic and consists of 3 major parts: rear, that encloses the receiver, front upper with the carrying handle and flashlight mount, and front lower, with pistol grip and trigge rguard. The housing is fixed to the receiver by the removable front cap at the front of the magazine, by the buttplate screw at the rear end of the receiver, and by the U-shaped union member at the front end of the receiver. The buttplate can be rotated around its screw, so it could be set in the horizontal plane to act as a support against the holding arm, when firing the gun off hands. On the model 10A the crude open sights are built into the integral carrying handle. On the model 10B the rear sight is built into the folding carrying handle base, and the front sigh is mounted on the barrel and can be folded back and down, when not in use, to avoid snagging.