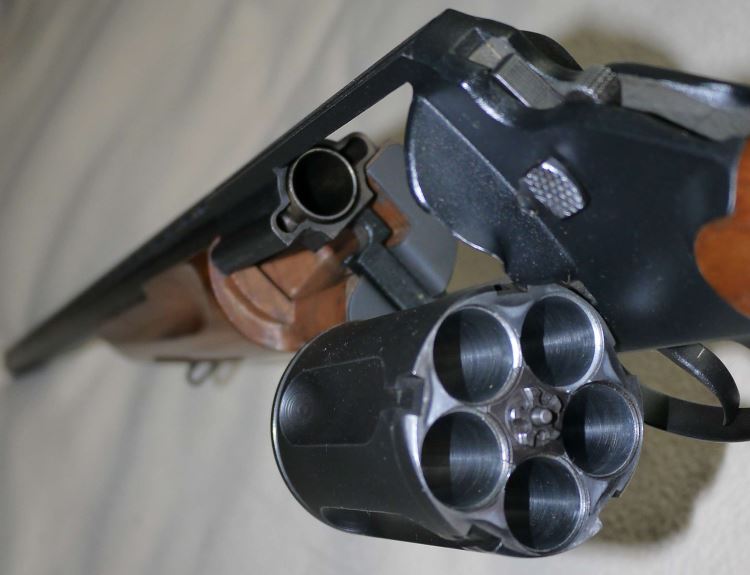 OTs-62 less-lethal weapon (firing special 12 gauge shells with rubber bullets), based on MTs-255 shotgun. it is intended for Law Enforcement use.

MTs-255 revolver shotgun was developed during early 2000s by Central Research and Design Bureau of Sporting and Hunting arms (TSKIB SOO), located in the city of Tula, Russia. Originally produced as a hunting / sporting gun in a number of calibers (12, 20 and .410 gauges) and configurations, it was also offered as a “tactical” weapon for Law Enforcement use, in 12 gauge and equipped with side-folding stock. Unlike “civilian” versions, which were moderately popular across Russian hunters, combat / tactical version of the MTs-255 remained obscure. A dedicated shortened “less-lethal” version of the MTs-255-12, chambered for special 12 gauge ammunition with rubber bullets was offered as OTs-62, but apparently very few were sold to Russian Law Enforcement agencies.

MTs-255 is built on a steel frame that hosts side-opening revolver cylinder with five chambers. Spent cases are ejected simultaneously from opened cylinder using traditional revolver-type plunger ejector; fresh cartridges are loaded one by one, and then cylinder is closed. Chambers are numbered on the outside of cylinder, with intent to provide shooter with capability to load gun with different types of shells, and then select appropriate load by manually rotating cylinder according to the marked numbers. Gun is equipped with traditional double / single action trigger with exposed hammer. When hammer is cocked, it also rotates cylinder to align next loaded chamber with the bore. Hunting versions are fitted with wooden forend and wooden stock with semi-pistol grip. MTs-255-12 tactical shotguns are equipped with polymer forend, pistol grip and a side-folding shoulder stock. Tactical version also is provided with Picatinny rail bolted to the top of the receiver.