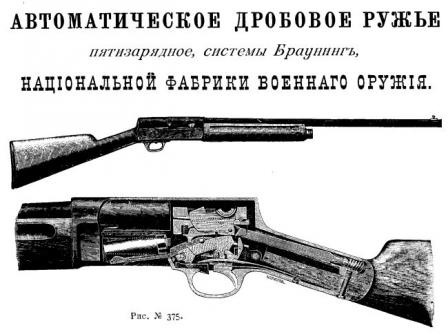 BrowningAuto-5 shotgun of Belgian manufacture in military configuration, as used by British forces under L32A1 designation.

Remington model 11shotgun in "Riot" configuration, for police or guard use.

John Moses Browning, the legendary American gun designer, invented thefirst practical self-loading shotgun in 1898. In fact, Browning designed and patented three different systems, but finally choose the last one to go ahead. It must be noted, that at the time the autoloading shotgun was something of absolute novelty, and the task of designing such gun was severely complicated by the fact that the switch over from black powder to smokeless ammunition was well under way, and general quality of shotgun ammunition was rather uneven,to say the least. Nevertheless, Browning managed to make hist prototype model work, and work well. He first offered this shotgun to Winchester,which was the sole buyer for his designs from 1886 on. However, severe technical conservatism on the part of the Winchester's boss,T.G.Bennett, and financial disagreements (Browning insisted on royalty-based payments, but Winchester at the time always bought new designs for fixed amount of money) resulted in break between the designer and the company. Browning then turned to Remington, but tragicdeath of the Remington's president from hear attack just minutes before scheduled meeting with Browning put an end to this route as well. Browning thenturned to the Belgian company Fabrique Nationale (FN), which at this time (1901) produced first Browning-designed self loading pistol (M1900)as fast as it could be made. FN management greeted Browning and his new gun with great enthusiasm, and in a short while FN produced the first FN Browning autoloading shotgun, known as Browning Auto 5, or A-5 inshort. Browning himself ordered 10,000 A-5 shotguns from the first batch for sales and distribution in USA, and sold all 10 thousands in about a year. Following the introduction of the new, increased custom tariffs by US government, Browning found that it was economically not reasonable to import more A-5 guns into USA, so he pursued FN to release rights tomake and sell Browning auto loading shotgun on US market to RemingtonArms Co (FN originally had worldwide rights for manufacture of Auto 5).In 1906 Remington offered the Browning-designed auto loading shotgun as Model 11, and manufactured it without interruption until 1947, with well over 800,000 guns made. Between 1949 and 1968 Remington also produced an updated (lightened and streamlined) version of the Browning's design, known as Remington Model 11-48. The FN produced Browning Auto 5 shotguns continuously (with interruptions for German occupation during both World Wars) until 1999, making Auto-5 probably the most successful and longest-producing sporting shotgun in the history. Overall output of Auto-5 shotguns made and sold by FN (During WW2, A-5 shotguns were made for Browning Arms Co by Remington, and since mid-1970s Auto-5 shotguns were also produced for FN in Japan by Miroku, under FN license) over the century well exceeds two million guns (2,000,000th Auto-5 was produced in 1970). Total estimate of worldwide production numbers for this legendary Browning design is well over three million guns.
Copies and clones of the Auto-5 shotgun were also manufactured in Italy by Franchi and Breda, in USA by Savage and in USSR / Russia by TOZ, and by some other manufacturers around the world. Many Auto-5 guns, made many decades before, are still used for hunting and shooting today, but, as time goes, Browning Auto-5 shotguns increasingly become collector's pieces.

Over the time, both FN and Remington produced wide variety of versions of the basic design. Hunting guns were made with plain or ribbed barrels of various lengths and gauges(12, 16 and 20), with magazine capacities of 4 or 2 rounds, various stocks, finishes etc. For police and military applications, FN andRemington created shorter-barreled shotguns with plain barrels. Many Remington guns have seen extensive use by US police and securityservices; US military also used Remington shotguns to train AA and aircraft gunners in shooting at fast-moving flying targets (clay pigeons), usingtraditionally stocked guns or guns, mounted in special fixtures to emulate aircraft machine guns. Belgian-made guns have seen less military service, although British army issued more than few A-5 shotguns as L32A1 during Malay counter-insurgency operations and later.

BrowningAuto-5 shotgun uses recoiling barrel to operate its action. The system is of so-called long-recoil type, as barrel and bolt recoil together for entire length of the recoil stroke, being securely locked by pivoting piece, installed in the bolt. This piece, when pivoted up, engages the cut in the barrel extension with its large locking lug. Upon completion of the full recoil path, the bolt is arrested in the rearmost position,and the locking piece inside it is tipped down to release the barrel.Barrel, under pressure of its own return spring, located around the magazine tube, slams forward, leaving the empty shell on the bolt face.Once the empty shell is clear of the barrel, it is ejected out of the gun. When barrel comes to the rest in the forward position, it automatically releases bolt catch, allowing the bolt to run forward,picking the fresh cartridge from the raised cartridge lifter, and locking the to the barrel at the end of the forward run. Bolt return spring is located in the butt. To achieve reliable functioning with wide variety of loads, Browning used self-adjusting friction brake in the recoil system, which consisted of several (one or two, dependingon the exact model) friction rings, located around the magazine tube.The tubular magazine holds four rounds; fifth one can be loaded into the chamber, making the total capacity of five rounds. One importantdifference between FN Auto-5 and Remington Model 11 shotguns is that the FN guns had a magazine cut-off lever, located on the left side of the receiver. This lever, when turned to the rear, locks the cartridgesin the magazine, allowing for quick replacement of the loaded round with another (presumably, with different type of projectile(s), i.e.shot to slug or vice versa). Remington shotguns did not have this feature.