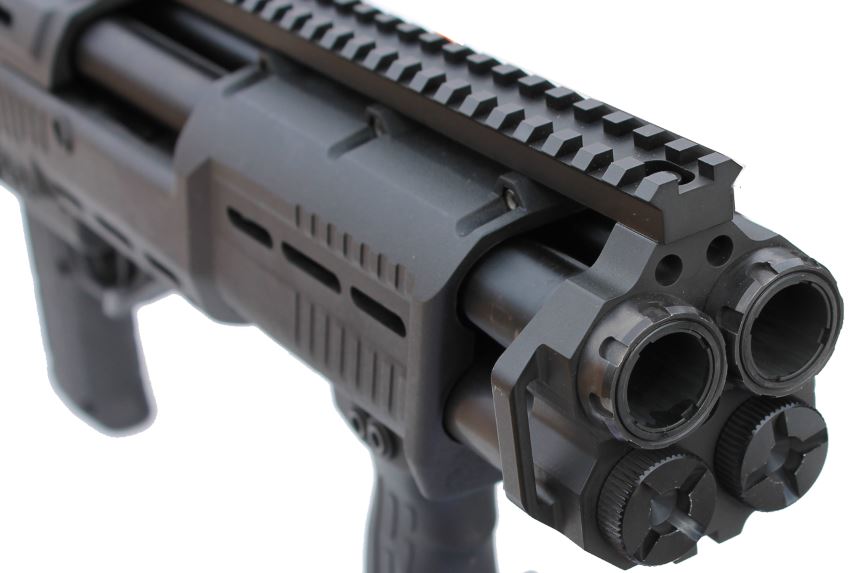 Standard Manufacturing DP-12 shotgun is a rather unique firearm, which combines certain advantages (and disadvantages) of two different types of shotguns – single-barrel, magazine fed pump action shotguns and double-barrel side-by side (SxS) shotguns. However, this gun does not possess all advantages of a true “double” gun, especially in regard to hunting, where two barrels can be equipped with different chokes for different game or distance, and used selectively upon shooter’s needs for each shot. The DP-12 requires both barrels to be fired before reloading, and if one wants to fire only one barrel sequentially, then loaded shells from the other barrel would be automatically ejected without being fired. Apparently, there’s no option to keep one barrel and magazine loaded for an emergency or occasional use while shooting other barrel more or less exclusively.

Standard Manufacturing DP-12 weapon is a sideby side double barrel, magazine fed, slide action (pump action) shotgun. It has two barrels, each equipped with its own bolt and its own underbarrel tubular magazine. Two bolts are cycled synchronously via the single slide-action forend. Each barrel has its own hammer and sear, both operated by a single selective trigger, similar to that used on many double-barrel shotguns. Each reloading cycle loads both barrels simultaneously. After that, first pull on the trigger fires the right barrel, second pull on the trigger fires the left barrel and then unlocks forend for next reloading cycle. Manual forend slide release is located in front of the trigger guard. Receiver of the DP-12 shotgun is machined from aluminum alloy, bullpup-type stock and forend are made from polymer. Tubular magazines are individually loaded through the large aperture located behind the pistol grip, at the underside of the gun. Same aperture is used to eject fired shells or unused rounds. DP-12 shotgun is equipped with Picatinny type rails for mounting various sights and other accessories. Both barrels are provided with interchangeable choke systems.