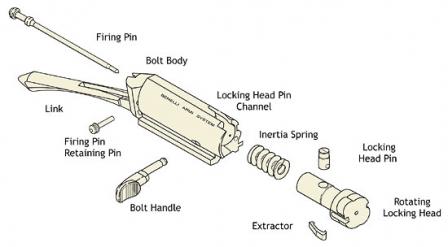 The Benelli M1 semi-automatic shotgun based on the proprietary Benelli system, which utilizes the gun recoil and inertia of the moving parts to operate the action. This system was developed by Benelli by the mid-1980s, and is simple and reliable in operation. System utilizes the rotating bolt head with two locking lugs that lock into the barrel extension. The bolt is mounted inside the massive bolt body (bolt carrier), and fixed to it by the locking pin, which allows the bolt head to move slightly forward and back and rotate simultaneously within the bolt body. The massive inertia spring is interposed between the boldbody and head, and separate recoil spring is located in the buttstock, pressing the bolt body forward via the link at its rear. When bolt is in the battery, the locking lugs of the bolt head are engaged with the barrel and locked it. Inertiaspring, pressing on the both bolt body and head, holds the head in the forward position relative to the body. When gun is fired, it recoils and moves backslightly against shoulder of the shooter. Due to the inertia of the bolt body,it resists the initial recoil movement, so the bolt head, locked rigidly with the barrel and the rest of the gun, moves back relative to the bolt body,compressing the inertia spring and rotating itself to unlock due to the headlocking pin being encaged in the cam slot in the bolt body. As soon as the rotation of the head is enough to unlock the bolt head from the barrel, the residual pressure of the barrel pushes the bolt head back, and this, in turn,pushes the bolt body against the recoil spring, overcoming the bolt body inertial and commencing the reloading cycle (ejection of the spent case and feeding and chambering of the fresh round). As soon as the bolt group returns into the battery, the pressure of the compressed inertia spring pushes the bolt body slightly back against the bolt head, causing the bolt head to rotate and lock into the barrel. Now, gun is ready for the next shot. This sounds quite complicated, but the whole system is mechanically very simple and has few moving parts, resulting in high reliability and easy production and maintenance.

The Benelli M1 shotgun is no more than the system described above, built inside the aluminum alloy receiver and  mated with conventional under barrel tube magazine and polymer stock, which is available with semi-pistol or pistol grip. Sights options are traditional shotgun sights,rifle type open sights or ghost-ring (diopter) sights. Mounts for laser pointers, tactical flashlights and red dot scopes also available on the market.

Overall, the Benelli M1 is a high-quality shotgun, available in numerous versions for both civilian, law enforcement and military use.