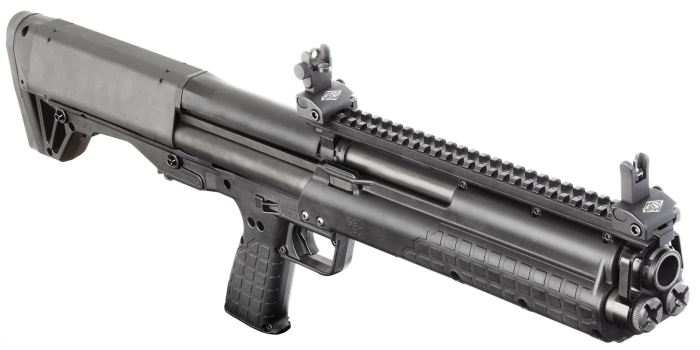 The Kel-Tec KSG shotgun was developed by private US-based arms-making company Kel-tec CNC industries, which is known for their innovative products. It was officially announced at the ShotShow-2011, and production is scheduled to mid-2011. This unorthodox shotgun, because of its compact dimensions and high capacity dual feed system, is well suited for home defense, security and police use. It bears some external and conceptual resemblance to South-African Neostead shotgun, but almost all details of design are different between those shotguns.

The Kel-Tec KSG shotgun is manually operated, pump (slide) action weapon. To cycle the action, user has to pull the polymer forend back and forth, ejecting the spent shell and loading a fresh one. Barrel locking is achieved by a swinging wedge, located inside the top of the bolt, which engages the barrel extension. Sliding forend is connected to the bolt by dual operating bars. Feed is from two tubular magazines, located below the barrel, side by side. At any given time, only one magazine is used to feed the gun. User can manually select which magazine to use by switching a 3-position lever, located behind the pistol grip. Middle position of the switch blocks feed from both magazines, turing the lever to one side brings respective magazine into the feed cycle. Once one magazine is depleted, user has to manually change the feed direction by switching the lever to feed from another magazine. Magazines are loaded by single rounds through the large loading / ejection port, located at the bottom of the gun, behind the pistol grip. Empty shells are ejected straight down through the same port. Manual safety is made in the form of the cross-bolt button, located above the grip, making the gun fully ambidextrous in use. Sighting equipment (iron sights and / or Red Dot sights) can be installed using standard Picatinny type rail located above the barrel. Additional Picatinny rail is provided at the bottom of the sliding forend, permitting installation of the optional vertical foregrip and / or tactical flashlight or laser.

Special thanks to Oleg Volk for images and info.