SMAW launcher in ready to fire configuration, with HEDP rocket in canister attached to the launcher. 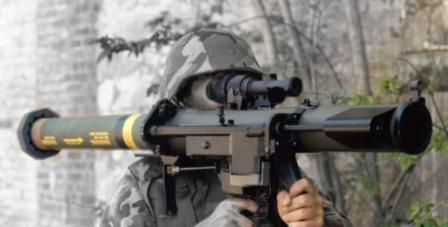 SMAW launcher in action. The barrel and mechanism of spotting rifle are clearly visible, attached to the right side of the launcher.

The SMAW (Shoulder-launched Multi-purpose Assault Weapon) has been developed by early 1980s by McDonnel Douglas corporation especially for US Marine Corps(USMC), which required lightweight, one-man portable multipurpose weapon,capable to defeat light armor, enemy bunkers and other reinforced positions.Currently manufactured in USA by Talley Defence Systems, the SMAW is in service with USMC since 1984. Known in service as Mark 153 Model 0 (Mk.153 Mod. 0) SMAW rocket launcher, it can fire a variety of ammunition, intended against light armor such as armored personnel carriers, enemy bunkers etc.

SMAW is a shoulder-fired,reusable rocket launcher that consists of a launch tube made of epoxy and fiberglass, with attached firing unit, 9mm spotting rifle, and sight bracket.Firing unit has dual grips, manual safety, and fire selector that allows to fire either a spotting rifle or a loaded rocket. Spotting rifle is  ballistically matched to all rockets. It is loaded with special ammunition and fires from special 6-round magazines. Spare magazines are clipped to each rocket container.Once operator roughly aimed the unit, using either telescope or night sight, or backup open sight, he starts to fire spotting rifle until rounds are hitting the intended target. 9mm bullets provide a visible trace up to 500m range, so operator can check his aim, and once on target, he then switches to rocket and launches it. SMAW launcher can be fired from the shoulder, using dual grips and shoulder rest, or from the ground, using foldingbipods located near the center of mass, next to the shoulder rest.

All types of rockets are supplied in disposable, sealed plastic containers,which are clipped to the rear part of the launcher. Once rocket is fired, empty container is detached from the launcher and discarded. Rockets have caliber of 83mm, and are stabilized in flight using spring-open switchblade-type stabilizations. Standard types of rockets are: Mk.3 HEDP (High Explosive Dual Purpose) weighting 4.35kg (5.9kg in container), Mk.6 HEAA (High Explosive Anti Armor) weighting 4.4kg (6.2kg in container), CPR (Common Practice – training),FTG (Follow-Through Grenade with dual warhead – first that penetrates barrier,and second that follows through the hole and explodes inside)  weighting 5.2kg (7.1kg in container), and CS (Confined Space with HEDP warhead – createsno backblast and an be fired from confined spaces such as rooms in building)weighting 6.9kg (9.1kg in container). The most recent (2003) addition to therange of SMAW rounds is Mk.80 rocket, known as NE (Novel Explosive, basically a thermobaric HEDP warhead).
It is worth to note that both self-loading (semiautomatic) Spotting Rifle and a 9x51mm spotting ammunition were developed in UK by Royal Ordnance.