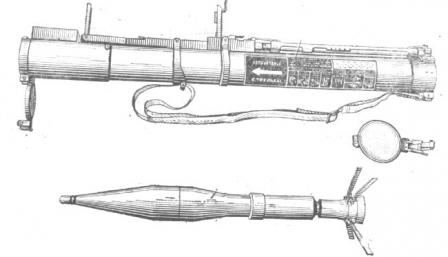 The RPG-22 rocket-propelled anti-tank grenade is an improved version of the earlier RPG-18 weapon. It was designed during late seventies and adopted by Soviet army in 1980. Production of the RPG-22 ceased in around 1993, as its penetration was found to be insufficient and it was replaced in production by more powerful RPG-26 rocket-propelled grenade. Due to the large stocks of the RPG-22,produced during its time, it served with Russian army for some moreyears, and few may still be stored somewhere in Russian army reserves.It also can be found in service with other armies of the ex-USSRcountries. Key improvements of the RPG-22 over the RPG-18 included more powerful rocket motor, redesigned launcher tube and warhead of larger caliber, with bigger charge of explosive, to provide rougly 25% increase in armour piercing capability.

The RPG-22 is a disposable,single shot rocket launcher pre-loaded with fin-stabilized rocket. The smoothbore barrel / container is made from two parts, main tube and a telescoping forward extension, which slides over the barrel, both made of fiberglass. The rocket is contained in the barrel tube, and its solid-fuel motorburns out completely within the barrel. Because the barrel is open at the rear to avoid recoil, there is a dangerous backblast area behind the firing weapon,at least 15 meters (45 ft) long. In transport/storage mode both ends of the barrel are closed by the front and rear covers, which are opened automatically when outer extension is pulled out. Firing mechanism is cocked manually by rising the rear sight; lovering the rear sight de-cocks the firing mechanism so the grenade can be brough back to safe mode if the there's no immediate target. The rocket is fin-stabilized (with four switch-blade like fins at the rear), and its solid-propellant motor burns out completely while rocket is stillin the barrel, accelerating it to about 133 m/s. The shaped charge(HEAT) warhead is loaded with 360 gram of explosive charge, resulting in armor penetration of up to 400 mm of homogenous steel armor.