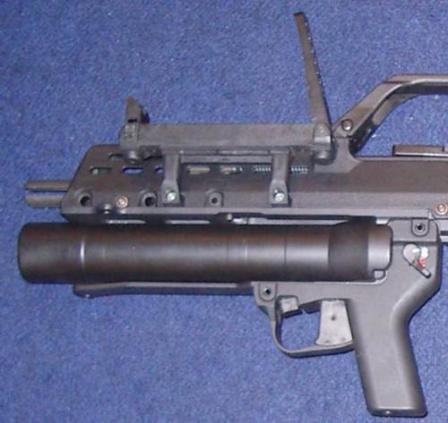 AG-36 grenade launcher mounted under the barrel of the HK G36C assault rifle. 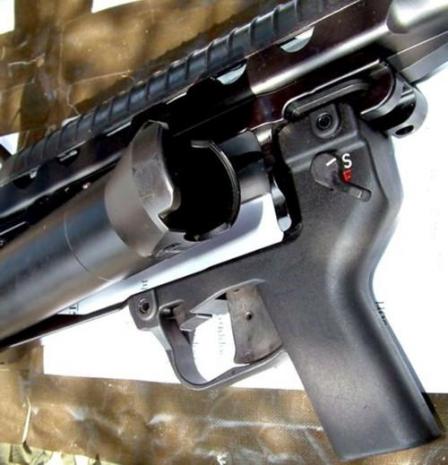 HK AG36 grenade launcher, with the breech opened for reloading. 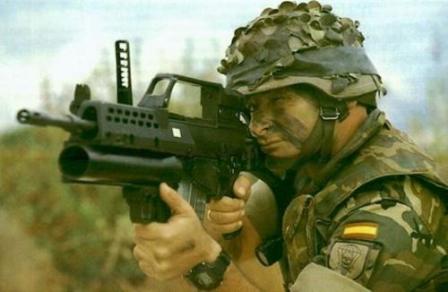 AG36 grenade launcher in action with Spanish soldier, mounted under the HK G36Erifle.

The AG36 grenade launcher has been developed by the famous German company Heckler& Koch as a replacement for its previous add-on 40mm grenade launcher, the HK79. The initial platform (host rifle) for AG36 was the HK G36 assault rifle,which is now in service with German and Spanish armies. Later on, the AG36 hasbeen adopted to British L85A2 assault rifle, and to Diemaco C7A1 assault rifle,which is in service with Dutch army. The latest version of the AG36 is the AG-C/ EGLM (Enhanced Grenade Launcher Module), a modification which can be mounted on the  M16A4 assault rifles and M4 carbines using Picatinny type rails under the forend. A version of the AG-C grenade launcher, known as XM320, is now considered by the US Army as a possible replacement to the venerable  M203 underbarrel launcher under the OICW Block 1 program. If it will be adopted, it then would receive the M320 designation. A special kit is available to convert AG36 into a stand-alone weapon. This kit includes a detachable shoulder stock.

AG36is a single shot, break open weapon. The barrel opens by unlocking and swinging its breach to the left. This allows the operator to use projectiles of any length, including extra-long less-lethal 'baton' and tear gas warheads. The trigger of AG36 is of double-action only type, and it is provided with ambidextrous manual safety. Standard sight is of ladder type, with electronic rangefinding sight being developed for future precision applications. AG36 canfire all standard types of 40×46 mm 'low velocity' grenades.