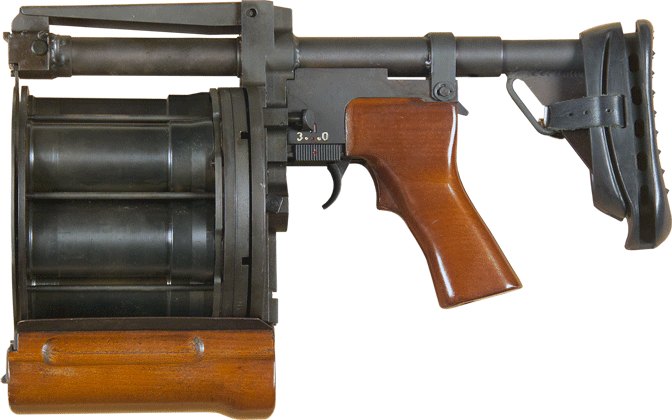 VOG-25 type grenades, originally developed in Soviet Union for GP-25 underbarrel grenade launcher, feature “caseless” design, in which propelling charge is located in the base of the projectile. Upon discharge, this design leaves no fired case in the barrel, allowing for faster reloading. Typical 40mm caseless grenade has complete weight of about 250 gram, and muzzle velocity of 75 m/s, with effective range of up to 400 meters. These grenades are available in several loadings, including HE-FRAG, HE-FRAG jumping, HE Thermobaric, Flash-Bang, practice and other types. However, Avalanche grenade launcher can accept grenades which are no longer than 114 mm overall, which is limited by the size of its revolving cylinder.

Avalanche grenade launcher is a revolver type weapon, of variation historically known as “pepperbox”, because each cylinder chamber also contains a rifled part to serve as a barrel. Unlike other revolver designs, there is no separate “barrel” outside of the cylinder, which makes Avalanche launcher noticeably shorter than competitors which fire conventional 40x46mm ammunition.  Cylinder action is operated by the clockwork spring, which is wound up during the loading procedure. Chambers are loaded one by one from the front, through the firing aperture at the front of the cylinder casing. The trigger is of double action only type. Avalanche grenade launcher is equipped with telescoped shoulder stock with built-in spring buffer and rubber buttpad, and a compact wooden forend below the cylinder. Standard sights are of folding ladder type, with settings ranging between 100 and 400 meters in 50-meter increments.