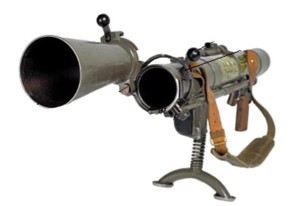 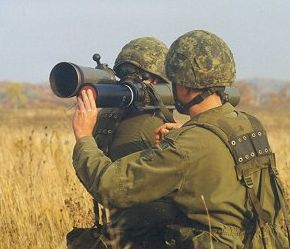 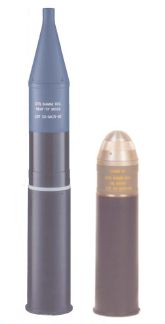 Just two types of many dozens of different 84mm rounds – the rocket-boosted HEATround at left, and the HE-FRAG round at right, both made in Belgium by Mecar.

Swedish arms designers began to experiment with recoilless antitank rifles in early 1940s. Their first design, a shoulder-fired, single shot weapon, fired a20mm solid projectile from a rifled barrel. This design has been adopted by Swedish army in 1942 as the m/42, but its small-caliber solid projectile was hardly effective against the new tanks, which emerged during the Second Worldwar. By the mid-1940s, Swedish designers adopted the idea of the shaped-charge HEAT ammunition, and by the 1946 produced their first prototype of the large-caliber recoilless rifle, which fired HEAT grenades. This single-shot,shoulder fired weapon quickly evolved into the "Granatgevär 8.4cm m/48Carl-Gustaf", or "Grenade rifle, caliber 84mm, model of 1948".This simple and effective weapon attracted significant interest and has been adopted by a significant number of military forces around the world. Other than Sweden, Carl Gustaf recoilless rifles were adopted by Australia, Austria, Belgium,Canada, Germany, USA and several other countries. Initial production was by the FFV factories, latter transferred to the SAAB-Bofors Dynamics AB, which is the current manufacturer of both M3 rifle and 84mm ammunition. The ammunition alsois manufactured in several countries which use the Carl-Gustaf launchers,including the Belgium and India.
While the Carl-Gustaf recoilless rifle / launcher was initially devised as an antitank weapon, its tactical role was quickly expanded with adoption of various other types of ammunition, such as high-explosive fragmentation rounds, close-defense shrapnel-type rounds, smoke, illumination and several other types of warheads.In fact, the Carl-Gustaf series recoilless rifles / launchers are among the most versatile weapons of the "one man artillery" type, extremely popular and widely used. Their only drawback is the bulk and weight of the launcher itself, which is significantly heavier than its major rival, the venerable RPG-7 antitank grenade launcher.

The Carl-Gustaf series recoilless rifles /launchers are single shot, breech loading weapons with rifled barrels. Unitary ammunition of 84mm caliber is loaded into aluminum cases with open bottoms,closed by plastic pressure discs. The primers are located at the side of the cartridge case, so the round must be properly aligned in the bore upon the loading. To achieve that, the case rim has a special indexing recess. Most types of projectiles are just warheads which are "blown out" of the barrel by the propellant charge, but some most recently developed types of ammunition has built-in rocket boosters, which are ignited as the round reaches safe distance from the shooter, greatly improving the maximum effective range. The rear part of the barrel is fitted with venturi nozzle, which is hinged to allow loading of the ammunition and ejection of the fired cases or unfired rounds. The M2 (m/48) barrels are made from steel, and the M3 (m/86) barrels are made from thin steel liners enclosed into polymer wrapping, so the M3 launcher is significantly lighter. The firing unit consists of the pistol grip with the trigger and manual safety, which is linked to the ignition module at the rear of the weapon by the tube, located below and to the right of the barrel. Under the barrel, there's also a shoulder rest, an adjustable bipod, and a front support grip. The Carl-Gustaf recoilless rifles / launchers are fitted with folding open sights, located at the left side of the barrel, but usually issued with telescope sight of 2X or 3X magnification, which has range-finding reticule and can be adjusted for temperature and wing conditions.
Standard crew for Carl-Gustaf recoilless rifle / launcher is two men, shooter and loader. Ammunition is usually carried in special plastic containers, which hold two types of ammunition each. Most modern HEAT rounds for Carl-Gustaffeature either single or a tandem shaped-charge warhead, and a rocket booster for increased range, and can penetrate up to 500 mm of armor behind the ERAprotection.