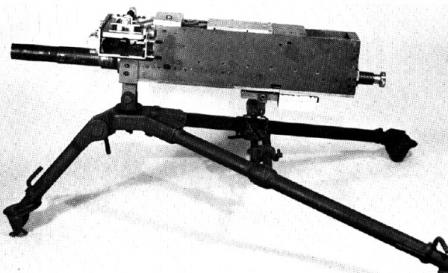 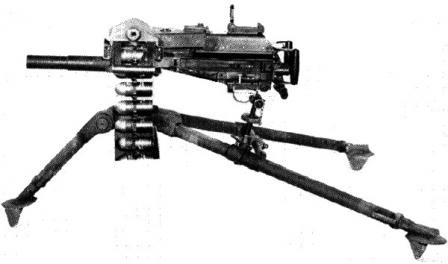 The Mk.19 mod.1 was the first upgrade of the basic design; about 1000 of such guns were converted from Mod.0 or or built as new.

Experimental Mk.19 mod.2 grenade launcher in remotely-controlled from, with electric trigger. Note that it had a much slimmer profile – too bad it didn’t work very well. 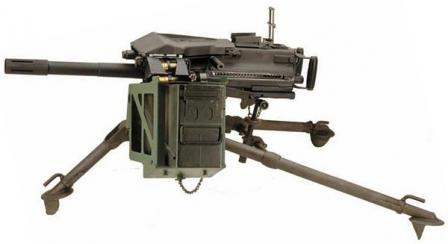 Mk.19 mod.3 automatic grenade launcher on tripod, with ammunition box attached.Today it is one of most widespread designs of this class in the world. 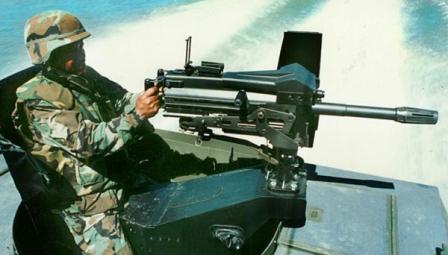 Development of the Mark 19 (Mk.19 for short) automatic grenade launcher was initiated by the US Navy in 1966. This was after experience gained during the Vietnam war.

Since about 1962, the US forces in Vietnam utilised several multi-shot 40mm grenade launchers firing low velocity 40x46mm M406 grenades. These were of course originally developed for the M79 single-shot weapon.

Among the launchers in Vietnam, the most notable was the Mark 18 belt-fed grenade launcher, developed by the Hughes corporation. This was a hand-cranked weapon that provided significant short-range firepower to riverine craft and Marines. However, all such weapons lacked effective range, and the US Navy decided to develop a new, automatic, self-powered weapon around the high-velocity 40x53mm M384 grenade. The M384 grenade was originally developed concurrently with the US Army’s M75 automatic grenade launcher, primarily mounted on UH-1 and AH-1 combat helicopters.

Development of the Mark 19 automatic grenade launcher began in July 1966, and by October 1967 the first three working prototypes of the new weapon were ready for official field trials. The production Mark 19 Model 0 grenade launchers entered service in Vietnam in early 1968, on board riverine craft and UH-1 Huey gunship helicopters belonging to the US Navy. Around 1971, the basic design was slightly improved, and type classified as ‘Mark 19 Model 1’.

These weapons were manufactured by US Naval Ordnance Station Louisville. In 1974, the US Navy attempted to produce a more streamlined version of the basic design, known as Mk.19 Mod.2. But this development never went past prototype stage, and in 1976 work began on a simplified and more robust improved version of the Mk.19, which was type classified as ‘Mark 19 Model 3’ (Mk.19 mod.3) in 1981.

The manufacturing contract for Mk.19 Mod.3 weapons was granted to Saco Defence (now General Dynamics Armament and Technical Products – GDATP). By the year 2000, at least 25,000 Mk.19 mod.3 grenade launchers were in service worldwide, mostly within all branches of the US armed forces.

In order to use a minimum of parts and gain maximum reliability of feeding, the Mk.19 uses a two-stage feed. Each round is first withdrawn rearwards from the belt on the opening stroke of the belt and then placed into a T-slot cut in the bolt face; on the closing stroke, the round is already properly positioned on the bolt and is fed straight into the chamber. Empty cartridge cases are ejected to the bottom as they are pushed down from the T-slot by the next cartridge (the same principle has been employed on some WW1 era machine guns).

Ammunition is fed using a special disintegrating belt. When rounds are fed into the chamber, the links stay on the case and are ejected from the gun along with the spent cartridge cases. Ammunition is usually supplied in belt boxes with a capacity of 32 or 48 rounds.

A loaded 32-round box weights about 19 kg (42 lbs). The Mk.19 grenade launcher is fitted with dual spade grips, and can be fired in semi-automatic of fully automatic modes.

Alternately, an electric trigger pack can be installed for remote controlled mounts. It can be installed on standard M3 tripods (using a Mark 64 cradle / adapter) for infantry use, or on various vehicle mounts for jeeps, armored vehicles, naval vessels etc. By default, Mk.19 mod.3 grenade launchers are equipped with machine gun type iron sights, but other types of sighting equipment (including night sights and range-finding electronic sights) are available.

Today the primary ammunition type for Mk.19 mod.3’s in US service is the 40mm M430 High Explosive, Dual Purpose(HEDP) round, which can penetrate up to 50mm (2″) of rolled homogenous armor and provide an effective anti-personnel fragmentation effect with a damage radius of about 15 meters (lethal damage / kill zone radius 5 meters).