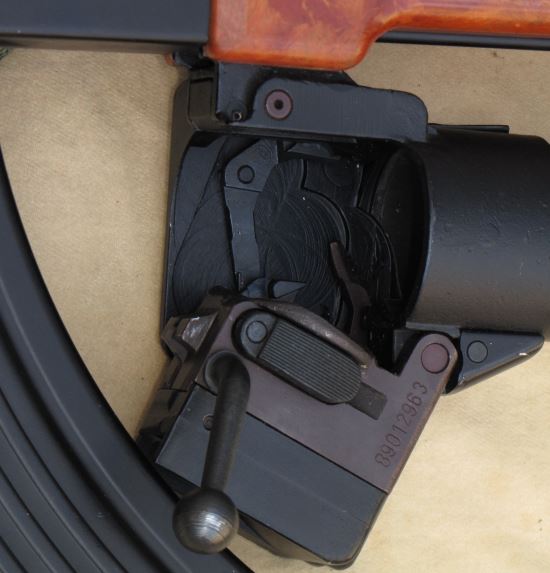 Polish military experts began development of their own underbarrel grenade launcher in around 1969. First prototypes were tested in 1970, and in 1974 Polish army adopted a new 40mm underbarrel weapon for their license-made Kalashnikov AKM rifles, designated as kbkg. Wz.1974 Pallad. In 1983 Polish military also adopted a stand-alone, hand-held version of the same weapon, designated as Pallad-D.

Pallad grenade launchers are built around proprietary 40x47SR ammunition designed in Poland, which is not compatible with 40×46 NATO-standard ammunition. Basic version of this ammo is NGO-74 fragmentation round, which fires 193gram projectile with muzzle velocity of about 78 m/s. This ammunition uses aluminum semi-rimmed cases; small powder charge is contained inside a primed and cut-down 7.62x54R cartridge case which is inserted into the base of the 40mm case.

The Pallad underbarrel grenade launcher is a breech-loading, single shot weapon with rifled barrel. It uses hinged breechblock which rotates back and to the bottom for reloading. Normally it is mounted below a Kalashnikov AKM or compatible rifle using a special polymer forend and a bayonet mount on the barrel. Iron sights are located on the left side of the barrel, near the muzzle. Manual safety and trigger lever are located near the breech of the gun, also on the eft side.

Pallad-D hand-held grenade launcher differs from its parent weapon by having a separate pistol grip and a bottom-folding metallic shoulder stock with large rubber recoil pad.