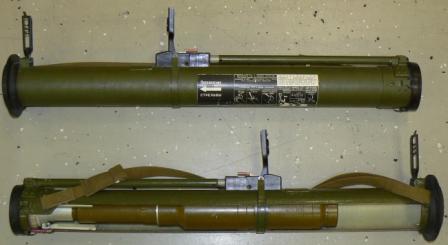 RShG-2 rocket-propelled assault grenade (at the bottom the container is cut out to show the rocket and its warhead).

The RShG-2 rocket-propelled assault grenade is a dervicative of the RPG-26 anti-tank rocket grenade, with only differences being the warhead andre-graduated sights. Instead of the HEAT warhead as in RPG-26, the RShG-2 carries a Fuel-Air Explosive (thermobaric warhead in Russian nomenclature, as its primary kill effect is achieved by high temperature and blast pressure wave) warhead which is intended against soft skinned and lightly armored vehicles, buildings, military installations and enemy personnel in defilade or in the open. It was adopted by Russian army in around 2000, and is issued to Russian troops as an infantry support weapon, and also offered for export.

The RShG-2 is a disposable,single shot rocket launcher pre-loaded with fin-stabilized rocket. The single-piece smoothbore barrel / container is made of fiberglass. The rocket is contained in the barrel tube, and its solid-fuel motorburns out completely within the barrel. Because the barrel is open at the rear to avoid recoil, there is a dangerous backblast area behind the firing weapon.In transport/storage mode both ends of the barrel are closed by the front and rear covers, made of rubber; those covers shall not be removed manually and are destroyed during the rocket launch. Firing mechanism is cocked manually by rising the rear sight; lovering the rear sight de-cocks  the firing mechanism so the grenade can be brough back to safe mode if the there's no immediate target. The rocket is fin-stabilized (with four switch-blade like fins at the rear), and its solid-propellant motor burns out completely while rocket is still in the barrel. The thermobaric / FAE warhead contains 1.16 kg of explosive fuel, which rougly equals in blast effect to 3 kg of TNT explosive. FAE blast radius is about 1 meter.