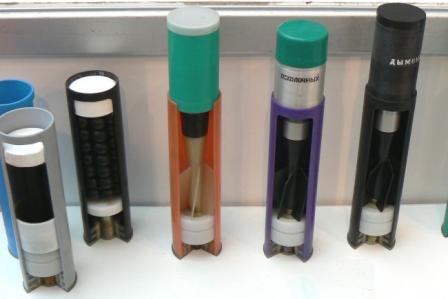 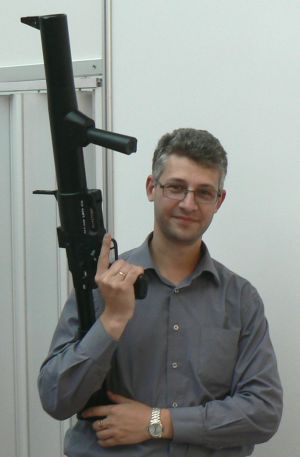 Author posing with RGS-50M grenade launcher; note the size of the weapon.

The RGS-50 grenade launcher was developed during late 1980s as a dedicated riot control weapon for Russian Law Enforcement (KGB in particular) organizations. During late 1990s it was slightly modified with changes in trigger, stock and recoil buffer, and was designated RGS-50M. The RGS-50M special-purpose grenade launcher is currently being manufactured by ZID factory in Kovrov and is used by various Russian Law Enforcement agencies. The RGS-50M is primary a less-lethal and door-breaching weapon, although it also can fire ‘lethal’ high explosive fragmentation and armor piercing rounds. The round line-up also includes tear gas grenades, rubber slug / rubber buckshot rounds, flash-bang rounds, breaching rounds and inert training rounds. Due to the large caliber the weapon is highly effective, and capable of significant range, but it is also quite heavy and bulky, and gas significant recoil.

The RGS-50M grenade launcher is a single shot break-open smooth bore gun. It fires specially designed rounds of ammunition that use polymer cartridge cases and fin-stabilized projectiles (for long range applications). The trigger is of single-action type, with cocking projection on the hammer protruding outwards from the receiver via the cut on the right side of the gun. It is fitted with additional folding grip below the barrel. The shoulder stock contains a spring recoil buffer and is detachable for storage and transportation; gun also can be fired with butt removed, although this would require very strong hands. The sighting equipment consist of a fixed front sight and folding ladder-type rear sight, marked from 50 to 150 meters.