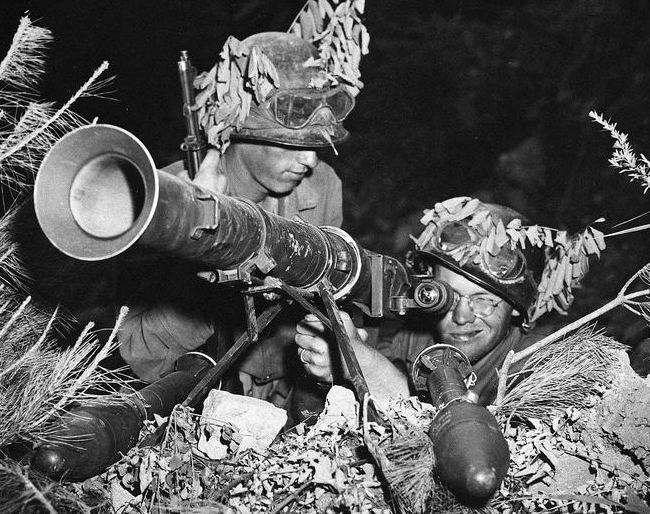 The M20 Super-Bazooka antitank rocket launcher is built around two-part aluminum alloy smoothbore barrel, open at both ends. Barrel can be easily disassembled into two parts (front and rear) for more compact storage and transportation. Rockets are loaded into the barrel from the rear. After loading, rocket has to be connected to the electric firing system by its own wire, which is manually attached to the contact spring located next to the rear end of the barrel. When fired, the rocket motor creates significant dangerous backblast zone behind the launcher, which is up to 25 yards (23 meters) deep. Electric ignition system uses trigger-operated magneto to produce electric current which sets off the rocket motor. Manual safety is provided on the pistol grip. M20 Super-Bazooka antitank rocket launcher is fitted with folding reflecting optical sight installed on the left side of the barrel tube. Super-Bazooka can be fired off the shoulder, thanks to the skeletonized shoulder stock attached below the rear part of the barrel, and an optional folding bipod can be fitted to fire weapon from prone, supported position. Some Super-Bazooka launchers were also provided with retractable support monopod, located in front of the shoulder stock.