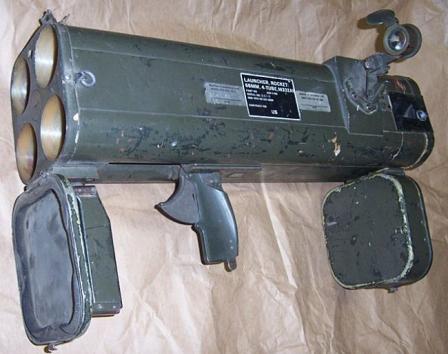 Drawing of the M74 incendiary rocket in flight configuration (with tail fins extended). 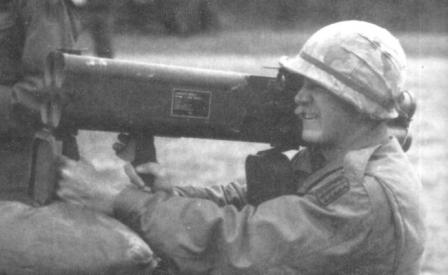 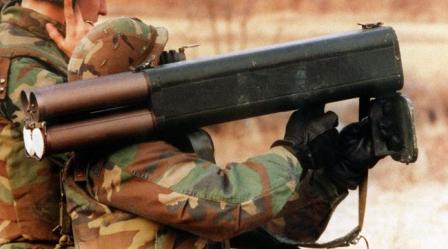 US soldier aims the M202A2 FLASH grenade launcher / flamethrower, circa 1991.

The M202 multishot rocket launcher evolved from XM191 multishot rocket launcher, that was extensively combat tested by US Army in Vietnam during late 1970s. The M202 is very similar to XM191 although it appears that its rockets were loaded with different incendiary agent -TPA rather than Napalm. It is also believed that XM191 was developed as a multipurpose weapon, capable of firing not only incendiary, but also 66mm HEAT rockets, compatible wit that of M72 LAW lightweight antitank weapon. The M202, however, was issued only with one type of ammunition – the M74 incendiary rockets.
Intheory, the M202 was an impressive weapon with significant combat capabilities – it had long range (compared to earlier flamethrowers),it allowed for relatively rapid fire and high maneuverability, itsphysical and psychological effect on unprotected infantry and military vehicles was significant to say the least. However, it appears thatM202 ammunition had some flaws (most probably due to poor quality control or design flaws), which resulted in self-ignition of warheads during loading of the weapon. Not surprisingly, such disastrous events made the M202 less than popular among the troops, and most M202 launchers were put into storage during late 1980s, although some launchers were observed during training of US and allied troops through early 1990s.
It must be noted that M202 made its biggest impact noton the battlefields but rather on cinema screens, when it was featured in the "Commando" movie (1985), starring Arnold Schwarzenegger. In this movie the M202 was used to blow up the police truck and free the Schwarzenegger's character, although in real life this would be thelast scene of the action, with main character quickly burned to death inside scorched truck (the M74 rocket generated fire as hot as 1800-2200oC for several minutes).

The M202 multishot rocket launcher is a four-barreled re-usable smootbore weapon which is loaded with a clip with factory-loaded M74 rockets, pre-loaded into separate aluminum tubes that are assembled together to form a single 4-shot clip. The clip is attached to the rear of the launcher and each loaded tube forms an extension to the barrel. Once clip is loaded and fixed to the weapon, launcher can be fired up to 4 times,with practical rate of fire as high as 1 round per second. Once all rockets are fired, the empty clip is detached and discarded. During storage and transportation the M202 launcher is closed at front and back with two hinged covers, which shall be unlocked and opened before loading and firing. The front cover has a dual-purpose handle, which is used for carrying the launcher in vertical position, and is used as a forward grip in firing position. Firing controls include folding pistolgrip under the barrel cluster, and folding collimating sight on the left side of the weapon. 66mm rockets use solid fuel engines,switch-blade type folding stabilizator fins, and a warhead loaded with some 0.6kg of self-igniting triethylaluminum (TEA), a gel-likesubstance. Since the M202 is a rocket launcher, upon firing it produces a dangerous backblast zone about 15 meters long.