AT4 launcher tube (fired) and grenade in in-flight configuration, with stabilizator finsextended. 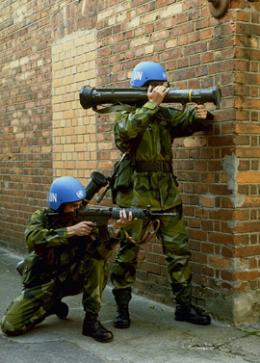 The AT4 recoilless antitank weapon is a joint effort of the Saab Bofors DynamicsAB (Sweden) and ATK Inc (USA). developed in early 1980s, the AT4 has beenadopted by US armed forces as M136 LAW (Light Antitank Weapon, generally replacing earlier M72 LAW), and also is used in Sweden,Brazil, Ireland and few other countries. The AT4 is manufactured in USA and Sweden.

AT4 is a disposable, single shot, recoilless weapon, available in several versions, which differ mostly in the type of warhead. The original 84mm HEATwarhead for AT4 has been "borrowed' from Carl Gustaf M2 recoilless rifle,but, unlike the Carl Gustaf, there's no separate round of ammunition to load into barrel – instead, the entire weapon resembles the one round of ammunition,along with firing and safety mechanism, polymer smoothbore barrel / container,and open sights. To improve accuracy and effectiveness, each unit can be fitted with quick-detachable sight mount.
The AT4 is a typical recoilless weapon, which uses a charge of propellant (gunpowder), located inside the open barrel. Both front and rear ends of the barrel are closed with covers, which are destroyed when gun is fired. When weapon is fired, the gas pressure pushes the projectile (fin-stabilized warhead) out of the barrel, while the backblast from the rear part of the open barrel counters any recoil. To allow the soldiers to fire such weapons from confined spaces,SAAB Bofors developed the AT4CS version of the weapon. AT4CS features a counter-mass (some amount of liquid) in the rear part of the barrel, which is pushed back and partly evaporated upon the fire, compensating for the recoil,and effectively blocking the backblast. The standard sights are mounted on folding bases and are factory preset for 200 meters range, with single diopter rear and front post with two additional lead posts for firing at moving targets. For transportation, sights are folded and protected by sliding covers. The firing unit is mounted at the top of the barrel, with manual cocking lever, manual safety switch and a button-type trigger. The projectile itself has a warhead and a tail unit, with front-folding stabilizator fins and a tracer unit. Standard warhead is of HEAT type, with shaped charge high explosive filling. There are other types of warheads available for AT4, such as HEDP (used against vehicles with thin armor and infantry, available as AT4 LMAW).