XM148 / Colt CG-4 Grenade Launcher on an early model M16 Rifle. The XM148 served as a proof of concept for the more sucessful M203 grenade launcher

M203 Grenade Launcher with M16 handguards; removed from the rifle 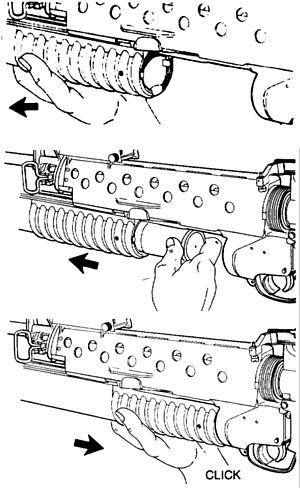 Diagram from the M203 manual, depicting the loading process,  from top to bottom: 1) Opening the breech 2) Inserting the grenade round and 3) Closing the breech

The M203 Grenade Launcher was developed between 1967 and 1968 by the AAI Corporation of USA. It was in answer to a contract request from the US Army. this contract was issued on the basis of experience gained by the US Armed Forces in Vietnam with the M79 40mm grenade launcher. The M79 was a successful design but it was a separate item, so it required an additional personal defense weapon to be carried by the grenadier. There was also the unsuccessful XM-148/CG-4 40mm Underbarrel Grenade Launcher, developed in the mid 1960’s by Colt in an attempt to cure the deficiencies of the M79.

The new underbarrel grenade launcher was intended to be used with all available 40mm ammunition, and to be attached to the existing infantry rifle then in service, the M16A1.In late 1968 the AAI design was type classified as XM203, and in early 1970 the first M203 units went to Vietnam for field evaluation. After successful tests the US Army ordered large quantities of M203’s. As AAI had no resources for mass production, the manufacturing contract was issued to Colt.

later on, more or less exact copies of M203 were produced in Egypt, South Korea and Bulgaria as the UBGL-M1, with a mount suitable for Kalashnikov AKM and AK-74 type  rifles. During the 1990’s, several modifications of the M203 were created, such as the shorter-barreled M203A2 (with a 9 inch barrel, as opposed to the standard 12 inch barrel). This variation was intended for the shorter M4 carbines used by US SOCOM (Special Forces Command). There were also versions with MIL-STD 1913 (Picatinny rail) compatible mounts. M203 launchers are still being used by US armed forces, and by many other armies, including those of Australia, Israel, South Korea, The Philippines, Turkey and others.

The M203 is a single-shot, breech-loading weapon with a rifled barrel. Loading is achieved by sliding the aluminum barrel forward, then inserting the round of ammunition into the breech and sliding the loaded barrel back into battery. The barrel is held in-battery by the manually controlled lock, which is disengaged by depressing the barrel catch lever at the left side of the launcher, above the middle of the barrel. The loaded cartridge is held at the breech face by the extractor claws, and remains stationary when the barrel is opened forward.

Once the barrel clears the fired case or unfired round, it is free to fall down from the breech face, so the next round can be loaded if necessary. The self-cocking firing unit with its own trigger is located at the rear of the M203 receiver, also made from aluminum alloy. A manual safety in the form of a swinging flap is located inside the trigger guard, just in front of the trigger. The rear part of the barrel is covered with a polymer handgrip. The standard M203 easily installs on the M16A1  or M16A2 type rifle, and installation requires about 5 minutes of work and a standard screwdriver for clamping screws.

If required, the M203 can be mounted on a separate shoulder-stock / pistol grip assembly to be used as a stand-alone weapon.  These attachments are available from several companies, such as Colt or Knight’s Armament. Standard sights for the M203 are of ladder type, and graduated from 50 to 250 meters in 50 meter increments. An optional quadrant sight can be installed on the left side of the M16A1/A2 carrying handle. It allows aiming at the ranges of up to 400 meters.