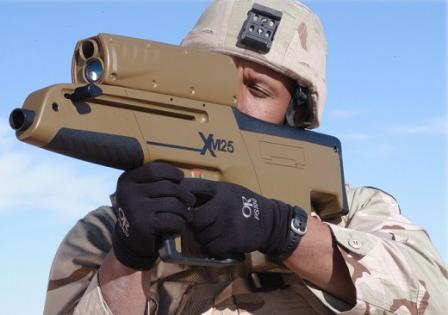 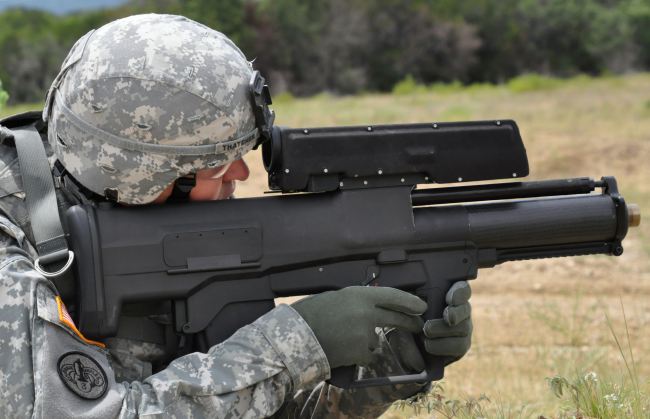 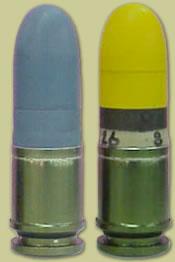 The XM25 is being developed by the ATK corporation of USA, with the help of the famous German arms manufacturer Heckler und Koch.The XM25 semiautomatic grenade launcher (air bursting assault weapon in the manufacturer's terms or Counter Defilade Target Engagement System in US Army terms) is a direct result of the American XM29 OICW program, which has been suspended in 2004 due to impossibility of reaching weight goals, and subsequently split up into two OICW Block 1 systems -the XM8 5.56mm modular carbine, and the XM25 25mm semiautomatic grenade launcher, along with XM104 target acquisition / fire control system (FA/FCS, also known as 'computerized sight'). It is possible thatin the future the XM8, XM25 and XM104 will be again combined into single modular system. However, current plans are to produce and test XM25/XM104 system as a stand-alone weapon, which will greatly improve the firepower of every infantry squad. The 25mm HEAB (High Explosive Air Burst)programmable ammunition will have at least three times longer effective range against point target, when compared with current 40mm systems such as M203 single-shot or Milkor Mk.1 multi-shot grenade launchers. It also will improve lethality and hit probability thanks to the rage-finding day/night sight, combined with ballistic computer, which will automatically pre-set the aiming reticle in the sight for measured range and program the 25mm grenades to explode in air exactly over or next to the target.The point-detonating capability also will be retained for back-up or anti-vehicle operations. The 25mm ammunition, used in XM25, will share the HEAB warheads with the 25mm crew-served XM307 OCSW weapon, but the cartridge will be shorter, to provide slower velocity and less recoil. XM25 also will be provided with other than HEAB ammunition options, such as FAE/thermobaric and HEAT (armor piercing, with penetration up to 50mm/2inch of RHA) point-detonating warheads for anti-personnel and anti-vehicle use, as well as canister flechette rounds(loaded with multiple steel darts for close combat). Training and less-lethal ammunition also is planned for XM25.

As the XM25 is a stand-alone weapon, its operator (grenadier) will have to carry an additional personal defense weapon, such as pistol or a carbine. Current plans are to issue about two XM25 weapons to infantry squad. It also must be noted that XM25 will not replace neither M249SAW / light machine guns, nor the 40mm underbarrel grenade launchers (current issue M203 or proposed XM320 single shot add-on weapons).

In 2010 several pre-production XM25 weapons were sent for the field testing by US Armed forces operating in Afghanistan. Following catastrophic failure of one XM25 which happened in 2013, existing XM25 grenade launchers were recalled from the Army, and US Congress has severely cut its funding for the program. As a result of various delays and cuts, as of late 2016 final fate of the XM25 is still undecided.

The XM25 is a gas operated, rotating bolt, semiautomatic weapon. It is designed using bull-pup layout, with the magazine and bolt located in the buttstock. The weapon housing is made from impact-resistant polymer. The ejection windows for spent cartridge cases are located on both sides of weapon;at any moment, however, only one ejection window is used, the other being closed by the integral dust cover. This, along with ambidextrous controls, allows theoperator to fire XM25 from either shoulder, as required. The top of the weapon is fitted with the rail and electronic interface, and will accept XM104 TA/FCS sight unit. The interface is required to provide range information for programming unit, which sets up the grenade airburst fuse at the instant of firing. The XM104 sighting unit is battery-operated, but, shall it fail due to battery run-out or damage,the XM25 could still be used as a direct-fire weapon with the grenades automatically set to point-impact detonation mode. The additional fire mode, range finding and sight control buttons are located at the front of the enlarged trigger guard.XM25 uses detachable, single stack magazines, which hold 6 rounds.