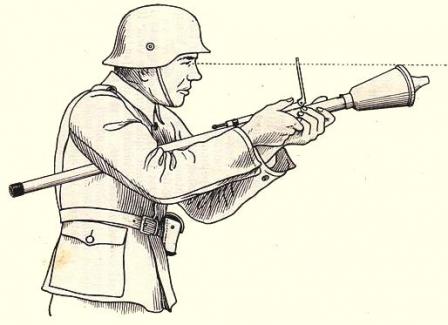 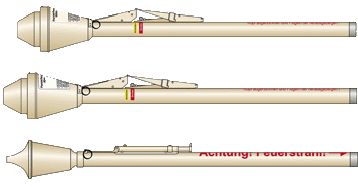 The Panzerfaust ("Tank fist", or Pzf in short; also initially known as "Faustpatrone") was one of many revolutionary developments, produced by Germans during World War 2. These simple but effective weapons proved to be devastating against Allied tanks during second half of the war, and, more important, these weapons set the pattern for most post-war developments in the field of man-portable antitank weapons.
The origins of Panzerfaust lie in recoilless anti-tank cannons, produced by Germans during earlier stages of WW2. Actually, any Panzerfaust can be described as a disposable recoil-less weapon firing shaped charge HEAT warhead. Developed by Dr. Heinrich Langweiler of HASAG Co, first Panzerfaust, later known as Panzerfaust30M Klein (small), entered small scale production by summer of 1943, and first Panzerfausts were fired against Soviet tanks in November 1943. By the end of thesame year HASAG produced an improved version of the first weapon, known as Panzerfaust 30M. It was basically the same thing, but fitted with bigger warhead, which resulted in improved armor penetration. Early in 1944 the next model appeared, the Panzerfaust 60M. This weapon doubled the effective range of fire from 30 to 60 meters by using launching tube / barrel of larger caliber and more powerful propellant charge. Warhead was still the same. In November 1944 a further improved version appeared, the Panzerfaust 100M, which extended effective range to 100 meters by using tandem propellant charge. By the end of the war German engineers worked on even more improved Panzerfaust weapons, withrange extended up to 150 and even 200 – 250 meters. The semi-experimental Panzerfaust 150M served as a pattern for first Soviet post-war RPG, the RPG-2,and most other countries also were quick to copy one of the most effective, yet simple infantry weapons of WW2 – the Panzerfaust. It must be noted that Germany produced several millions of various Panzerfaust weapons before end of the war,and great scores of Allied tanks were destroyed using these crudely looking weapons.

All war-time Panzerfaust weapons are about the same in design, differing mostly in details of propellant charge and warhead. The weapon is fired using recoil-less principle. The launcher is a simple, smooth bore tube / barrel, open at both ends. Grenade is propelled using a charge of black powder, which burns completely within the barrel. Trigger unit is of mechanical design and is very simple. Upon discharge, weapon generates a significant back blast with dangerous  zone being up to 10 meters from the rear of the barrel. The projectile is as haped-charge HEAT warhead which is stabilized in flight by several folding fins at the rear. Sights are of mechanical ladder type, folding; there is no front sight per se, and the top of grenade is used instead when aiming through the rear sight aperture.
Panzerfaust launchers were supplied to troops assembled and ready to fire; after discharge, empty barrel was discarded.