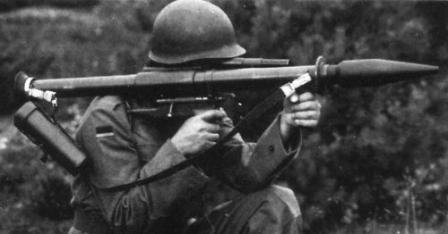 Panzerfaust 44 "Lanze" (or Pzf 44 in short) can be considered as a further evolution of the WW2-era Panzerfaust line of antitank weapons, although in greatly improved form. Development of this weapon commenced circa 1960, with grenade and launcher developed by German company Dynamit-Nobel AG. The Pzf 44 entered German service during mid-sixties and in several modifications served until mid-eighties, when it was replaced by moremodern Panzerfaust 3 (Pzf 3) weapon.

Panzerfaust 44"Lanze" (Pzf 44) consists of a recoil-less launcher which fires rocket-assisted grenade with shaped-charge HEAT warhead using Davis counter-recoil principle. The launcher is reusable, and consists of a smoothbore barrel, open at both ends. At the bottom, it has a trigger unit with shoulder rest, and the front grip. trigger unit is somewhat unusual as it uses special ignition cartridges, loaded into box magazine, to ignite launching charge in the barrel through the hole in the barrel wall. The recoilless launching cartridge consist of a black powder charge and a counter-mass, made of powdered iron. Upon discharge, the iron powder is ejected through the rear end of open barrel,providing counter-mass for projectile and decreasing the backblast danger zone.The cartridge is carried and loaded separately, and projectile is attached to it only when cartridge is partially loaded into the launcher. The standard projectile is a HEAT warhead fitted with rocket booster and folding stabilization fins. Muzzle velocity of projectile is about 170 m/s, and rocket booster increases it up to about 210 m/s, resulting in maximum firing range of about 1000 m (accurate fire against tanks is possible at ranges up to 300-400 meters).Standard sight is telescope, with three sighting marks for ranges of 200, 400 and 1000 meters.