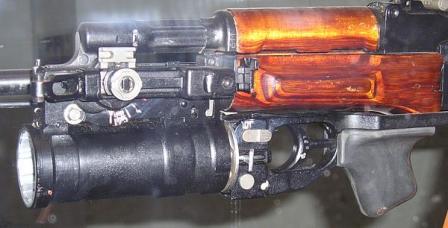 GP-30 launcher mounted on the AK-74 assault rifle. Note rubber recoil pad on the stock, which is issued with every GP-25 and GP-30 launcher. 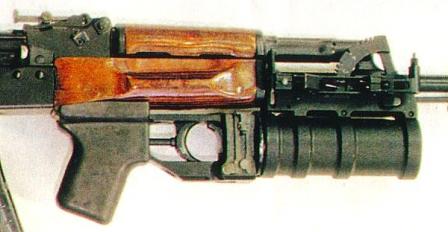 The GP-25 (Granatomyot Podstvolnyj=underbarrel grenade launcher) was developed between 1975 and 1978, based on the earlier experiments, conducted in USSR during late 1960s. GP-25 has been adopted by soviet army in 1978 for use with both 7.62mm AKM and 5.45mm AK-74 Kalashnikov assault rifles. In 1989 Russian army adopted the improved design, GP-30, which, while retaining the same combat effectiveness, is lighter,simpler and less expensive to make.
Both launchers use same ammunition – the 40mm fragmentation grenades VOG-25 andVOG-25P, and a less-lethal 'Gvozd' (Nail) canister round with tear gas. Both types of grenades utilize same integral "caseless" design, with the propellant and primer contained in the base of the grenade, so, when grenade is fired, there's nothing left in the barrel to remove/extract prior to loading of next grenade.
The barrel of single-shot launcher is rifled. Grenades are loaded from the muzzle and held in the barrel by a spring catch. Unfired grenades are extracted using a built-in push-out extractor, located at the left side if the weapon. The firing mechanism is of double-action type, with manual safety and several automated safeties, which blocks the firing if launcher is not properly installed on host rifle or grenade not completely loaded. On the GP-25, sights are mounted on the left side of the launcher, and had additional indirect firescale for firing at longer ranges (up to 400 meters); on the GP-30, the indirect fire capability has been discarded, and sights were moved to the right side of weapon, making the aiming more comfortable.Each grenade launcher is issued with rubber recoil pad for host rifle, and a special return spring guide with receiver cover catch for use on early production Kalashnikov rifles.
The VOG-25 and VOG-25P grenades provide effective range of about 100-150 meters.Grenades have point-impact fuses with timer self-destruct function and safety stand-off range of about 40 meters.Effective damage range of blast/fragments is about 5 meters. The grenades havepre-engraved rifling groves to fit into rifled barrel. The key difference between VOG-25 and VOG-25P grenades is that the latter isof bouncing type. This means that upon the impact on the ground, a special charge in the nose of grenade ignites and bounces it to a height of approximately one meter, where grenade explodes.