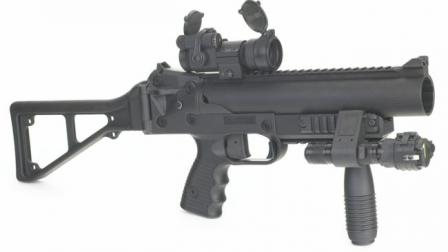 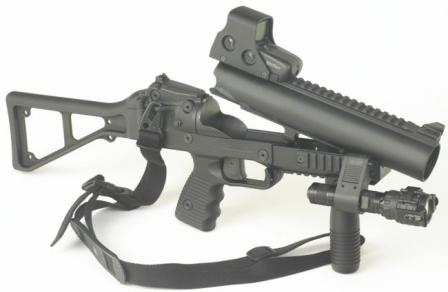 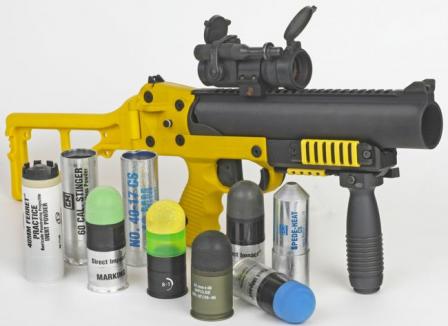 GL-06 grenade launcher is a dedicated stand-alone shoulder-firing weapon, intended for military and police applications. Designed by well-respected Swiss arms-making company Brügger & Thomet AG,GL-06 is already in use with certain European military Special Forces groups. A special dedicated "less lethal" version of GL-06 is produced as LL-06. It must be noted that the only difference between GL-06 andLL-06 is the color of the frame – both weapons are fully capable offiring a complete range of 40mm x 46 munitions.
It must be noted that GL-06 was born from recent request from police force ofone of leading European nations, which sought to obtain a less-lethal weapon foranti-riot application, with particular need for pin-point accuracy at standoff ranges (beyond 40 meters for such scenarios) when firing impact rounds. B+Tprovided its client with both weapon and a special round, with added benefit of compatibility with wide array of lethal and less-lethal ammunition produced in40mm low-velocity class. GL-06 is lighter and more compact than other stand-alone weapons of the same class (such as US M79 or German HK 69), yet it is capable of great accuracy,tactical flexibility and has good ergonomics.

GL-06 grenadel auncher is a single shot weapon, with rifled tip-up barrel. For loading and unloading, rear part of the barrel is tipped up; therefore,rounds of any conceivable length can be easily loaded and extracted without problems. Barrel opening is assisted by special spring, thus speeding-up the reloading process. The barrel lock levers are fully ambidextrous and located in front of trigger guard, within the reach of the index finger. Trigger is of Double Action Only type, with concealed hammer.Additional manual safety is provided in form of the cross-bolt button located on the receiver above the pistol grip. GL-06 is provided with integral open sights (with adjustable diopter-type rear sight), and an integral Picatinny type rail on the barrel, which permits installation of many types of sighting equipment. Three additional accessory railsare installed on the short for end, below the barrel. GL-06 is fitted with side-folding butt, made of durable polymer, and is equipped with sling attachment points.