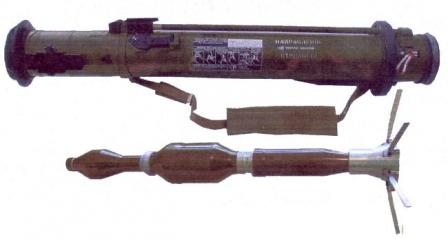 The RMG rocket-propelled multipurpose grenade is a dervicative of the RShG-1 assault rocket grenade. Its main purpose is to serve as a bunker-buster, to defeat enemy personnel behind light armor, walls and other protective means, as well as to destroy lighly armored vehicles and other military equipmen. It was adopted by Russian army in 2001, and is issued to Russian troops as an infantry support weapon, and also offered for export.

The RMGisa disposable,single shot rocket launcher pre-loaded with fin-stabilized rocket. The single-piece smoothbore barrel / container is made of fiberglass. The rocket is contained in the barrel tube, and its solid-fuel motorburns outcompletely within the barrel. Because the barrel is open at the rear toavoidrecoil, there is a dangerous backblast area behind the firing weapon.In transport/storage mode both ends of the barrel are closed by the front and rear covers, made of rubber; those covers shallnot be removed manually and are destroyed during the rocket launch. Firing mechanism is cocked manually by rising the rear sight; lovering the rear sight de-cocks the firing mechanism so the grenade can be brough back to safe mode if the there's no immediate target. The rocket is fin-stabilized (with six switch-blade like fins at the rear), andits solid-propellant motor burns out completely while rocket is still in the barrel. The tandem warhead consists of a small-caliber leading HEAT warhead and a follow-through thermobaric / FAE (Fuel-AirExplosive) warhead, which explodes inside the target to achieve maximum damage effect.