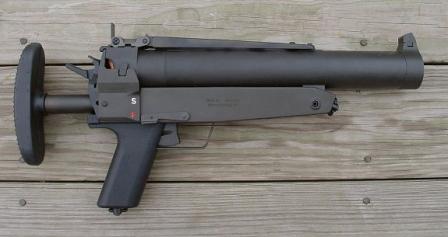 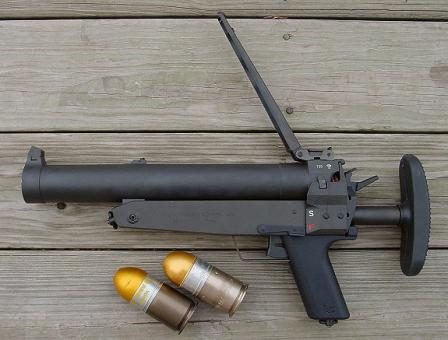 The HK69 grenade launcher has been developed by the famous company Heckler-Koch from Germany. This launcher has been adopted by the Bundeswehr (German army) in 1974 as the "Granatpistole 40 mm", or "GraPi 40mm" in short. This weapon is also offered for export under its original name, the HK69.

HK69 is a single shot, breech-loading weapon with rifled barrel. The barrel is made of steel, and is hinged to the receiver to be tipped up at the rear for loading and unloading. The single-action firing mechanism has an exposed hammer and ambidextrous manual safety, located above the trigger. The barrel latch, which unlocks the barrel for reloading, is located next to the hammer but operates independently, so the launcher could be safely reloaded with the hammer down, and the hammer can be cocked later at necessary moment. The launcher is fitted with polymer pistol grip and with retractable shoulder stock with rubber buttpad. The sights consist of a front blade and a folding-down ladder sight, graduated from 50 to 400 meters in 50m increments, with additional "short-range" flip up rear sight, graduated for 50 and 100 meters range. The HK69 can fire all types of 40mm low-velocity ammunition, including the HE-FRAG, HE-DP, smoke, illuminating and various less-lethal (tear gas canister, rubber baton) rounds.