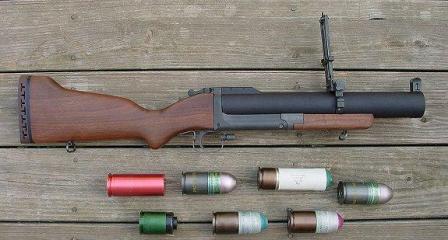 The story of a "Thumper" or "Blooper" (both were unofficial nick-names for M79) began in 1951, when the US Army recognized the need to fill the gap between the maximum range of a had-thrown grenades (about 50 meters) and the minimum range of 60mm mortars (about 400 meters). By the 1952, the army had a desired projectile, made in the form of a 40mm hollow ball, loaded with HE charge and with a pre-fragmented shell, made from notched square wire, blazed together to form a shell. early tests were conducted using spring-powered launchers and cup-shaped grenade launcher adapters for M1 Garand rifle, all under the codename PROJECT NIBLICK. In the 1952-53 Picatinny Arsenal developed a short, stubby, rimmed cartridge case about 46mm long, with so-called "high/low pressure" system, to launch the 40mm shells. The high/low pressure" system consists of a small, thick-walled compartment at the base of the cartridge case, where propellant (smokeless gunpowder) is stored. This compartment is connected to the empty cartridge interior by several vents. The small compartment formed the "high pressure" area, necessary to achieve proper burning characteristics of a propellant, while the empty interior of the case formed the "low pressure" area, resulting in mild barrel pressures, and low projectile velocities. This system allowed for lighter and less expensive cartridge cases and barrels, while maintaining necessary ballistic properties. the resulting cartridge has been type-classified as M406 HE-FRAG. Springfield Armory (the former Government arsenal) began to develop several launchers for 40mm M406 ammunition, and by the 1960 the first hand-held, single shot 40mm grenade launcher has been officially type classified as M79. First production M79 units were issued to US troops in 1961, and before production in USA ceased in 1971, more than 300 000 of M79 launchers were manufactured in USA by several contractors. Copies of M79 were later manufactured in south Korea by Daewoo and in South Africa by Milcor. At the present time the M79 is no longer used by US army, although it still can be encountered in the hands of soldiers of many other countries, such as Australia, El Salvador, Israel, Malaysia, Saudi Arabia, Turkey and some others.
First widely used in Vietnam, the M79 turned to be a complete success. Reliable and quite accurate in the hands of a trained operators, it provided extremely mobile firepower to smallest of the infantry units. Following the successful development of the M406 HE-FRAG round, several other types of 40mm ammunition were rapidly developed, including smoke and illumination rounds, HE-DP (dual purpose, fragmentation/antitank), incendiary, buckshot canister (for close-combat and self-defense). The key downside to the M79 was that it required the grenadier to carry an additional personal defense weapon, such as pistol or a submachine gun. This inconvenience was the key reason for development of the M203 underbarrel grenade launcher, which superceded the M79 in the service since early 1970s.

The M79 is a single shot, break-open weapon with rifled barrel. The barrel is hinged to the receiver and is locked closed by the rotating the lever at the tang of the receiver. 40mm cartridges of various types are loaded from the breech, then barrel is closed. Internal hammer is cocked automatically upon reloading. There is a manual safety, which automatically switches on when gun is reloaded. The trigger guard can be hinged sideways, so the gun can be fired in the winter gloves. The stock is made from wood, and the butt is fitted with the rubber recoil pad. Open sights consist of a hooded front sight and a n adjustable ladder-type rear (with windage adjustment), and is graduated from 75 to 375 meters in 25 m increments. It must be noted that trained operators often left the rear sight in its folding down position, and aimed down the barrel, still achieving good accuracy.