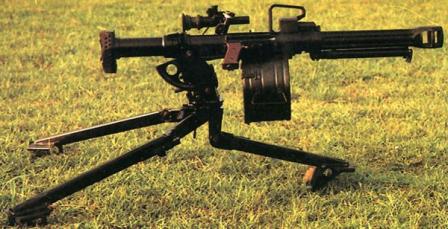 QLZ-87 grenade launcher in "heavy" configuration (on tripod, with 15-round drum), right side.
image: www.gun-world.net 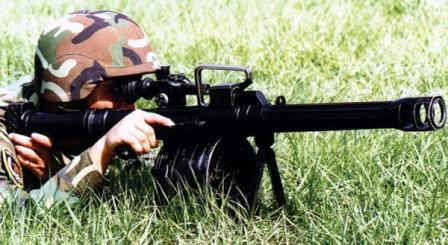 After much experimentation with locally built copies of Soviet AGS-17 grenade launcher, Chinese experts developed their own concept of such infantry support weapon. For some reasons they decided to trade some firepower for mobility, and to develop the lightest possible weapon, which can be operated and carried on battlefield by a single man. Furthermore, they developed their own 35mm grenade ammunition. To achieve minimum weight of weapon, they used locked breech action (that minimizes weight of recoiling parts) and discarded the complicated belt feed in the favor of much simpler magazine feed. early experiments were conducted with weapons known as W-87. these were distinguishable by wood buttstocks, bottom pistol grips and large conical flash hiders. W-87 launchers used top feed with box or drum magazines. With the time the design evolved, and several years ago PLA adopted the QLZ-87 automatic grenade launcher, that is a further development of W-87. At the present time (early 1987) the QLZ-87 launcher is being used by Chinese troops of Hong Kong garrison, as well as by some units located near the strait that separates mainland China and Taiwan. From available information it seems that QLZ-87 still has some teething problems and probably will be gradually improved in coming years.

The QLZ-87 grenade launcher is gas operated, locked breech weapon that uses rotary bolt and direct gas impingement system probably borrowed from M16 rifle. Gas system is fitted with manual adjustment valve. Charging of the weapon is conducted by pulling back and forward the pistol grip which is (unusually) located at the right side of weapon. This pistol grip is accompanied with trigger and safety/fire selector that allows for single shots and full auto fire. The steel receiver is of tubular shape and rather slim; at the top of the receiver there is a fixed carrying handle. Rear part of receiver is fitted with rubber shoulder pad. Feed is using drum magazines of various diameter, that can hold 6, 9, 12 or 15 rounds; standard capacities seem to be 6 or 15 rounds. Drums are attached at the bottom of the gun, unlike earlier W87 weapons. The smaller capacity drums are used in "light" configuration when gun is used from integral bipod; larger capacity drums are mostly used in heavy configuration, when gun is used from special tripod. Standard sighting equipment is telescope sight with fixed magnification which is offset to the left to provide low profile of weapon while firing at high angles.
It must be noted that rate of fire of QLZ-87 is rather high for such a weapon, especially consider its relatively low weight, and it must be a tough task to control the gun in full auto fire, especially in "light' configuration. Relatively small magazine capacity (even the biggest 15-round magazine holds two times less ammunition than a belt box for AGS-17 or Mk.19 launchers) also decreases the suppressive fire capabilities of the QLZ-87, but it seems that PLA experts prefer maneuverability over firepower.
There are few types of 35mm ammunition for QLZ-87 weapon; these include fragmentation shells that provide kill zone with claimed radius of about 10 meters, and armor piercing grenades with penetration up to 80 mm (not confirmed). The weight of complete 35mm round is about 250 gram, muzzle velocity about 190 m/s.