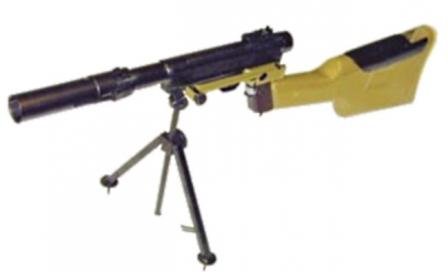 9mm PMAM noiseless blank cartridge, which is used to propel 30mmBMYa-31 grenade (shown above the cartridge).

The Device "D" (Изделие Д in Russian nomenclature) noiseless grenade launcher / handgun is an unique weapon, which was developed during 1960s or early 1970s for Soviet Spetsnaz forces. One of the main goals of the Spetsnaz at the time (in the case of the outbreak of the 'hot' war in Europe) was toattack and disable / destroy key NATO facilities such as C&C posts, ammunition and fuel storage depots, radar facilities, parked tactical aircrafts, and most important, tactical / medium range ballistic missile launchers. All these targets were relatively 'soft-skinned', so it was estimated that a 30mm projectile could carry enough explosives to penetrate the skin of the vehicle or equipment container and cause enough damage to disable it (i.e. ignite the fuelin the storage tank or make Pershing ballistic missile or fighter-bomber aircraft inoperable). To provide the Spetsnaz operators with maximum stealth, it was decided to make noiseless / flash-lesslauncher for such projectile, as this would help to hide actual firing position and thus improve chances of getaway. To provide more flexibility for the operators, it was decided to make the weapon dual purpose – it can fire 30mm explosive or incendiary grenades against material targets (aircrafts, fuel tanks, missiles etc) atranges of up to 300 meters, or 9mm AP bullets against enemy personnelat ranges of up to 200 meters. Designated Device "D" (Изделие Д),this weapon was issued to certain units of Soviet Spetsnaz since ninetyseventies, and apparently is still in limited use by elite Russian military Spetsnaz and FSB (former KGB) anti-terrorist units.

The heart of the Device "D" (Изделие Д)weapon complex is the 9mm (9×93) noiseless cartridge, designed along the lines of the smaller 7.62mm(7.62×63) PZ "Zmeya" cartridge. The heavy steel cartridgecase holds small powder charge and a piston, which can move inside the case to violently push the projectile out of the case and then jam itself at the case mouth, capturing powder gases (prime source f thegun shot sound and flash) inside the case. There are two types of cartridges intended for use in Device D – the 9mm PFAM "Falanga"cartridge, loaded with AP bullet, and 9mm PMAM "Mundshtuck" cartridge,loaded with pusher rod which transfers the energy of the piston to theseparately loaded grenade. The "Falanga" bullet is made of hardened steel with brass driving band at the front. The bullet weight is about 28 gram (432 grains) and the muzzle velocity is about 250 m/s (820fps). According to available information, PFAM bullet can penetrate 5mm of mild steel at 100 meters. The 30mm grenade, which is used along with 9mm PMAM cartridge, is designated BMYa-31 "Yascheritsa" (Lizard). Thisprojectile is loaded with unspecified amount of explosive or incendiary composition, and can penetrate up to 10mm of steel and then ignite fuel stored inside. BMYa-31 grenade weights about 130 gram (~4.5 oz) andPMAM cartridge propels it out of the muzzle cup launcher with muzzle velocity of about 110 m/s (360 fps). BMYa-31 projectile features pre-engraved rifling and a pusher rod at the rear, which comes into the contact with the piston of the propelling cartridge when gun is fully loaded. Inert grenade projectiles also are available for live fire practice.
The Device D itself is a large, single-shot, bolt action pistol. It is loaded with single cartridge through the opening at the top when boltis retracted. Once cartridge is placed in the gun, the bolt is pushed forward and then rotated to lock. To provide necessary accuracy when firing a heavy weapon, it can be fitted with detachable shoulder stock/ holster and a detachable adjustable bipod. To launch grenades, gun must be fitted with detachable muzzle cup launcher and an additional grenade sight, which is attached to the left side of the gun. Launcher PMAM cartridges are loaded same way as bullet-firing PFAM cartridges,and grenades are loaded into the muzzle cup from the front until locked inside by the spring retainer. Cup launcher is equipped with special manual extractor necessary for unloading of unfired grenades.