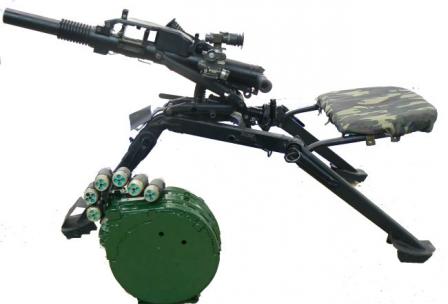 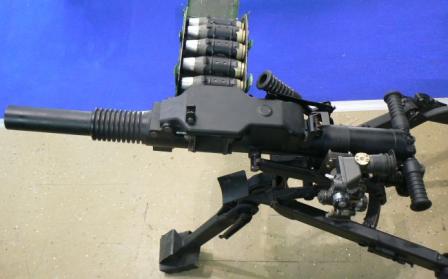 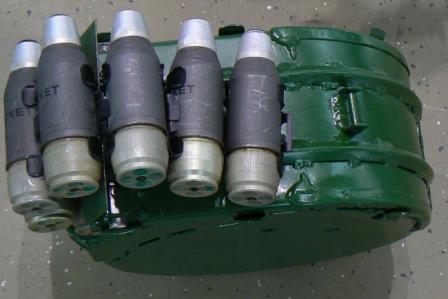 The development of a new Soviet automatic grenade launcher, which should have been more powerful than then (and now) standard AGS-17, wasinitiated in about 1980. New weapon was developed along with the new40mm 'caseless' grenade ammunition, similar in concept to the VOG-25rounds developed for GP-25 underbarrel grenade launcher, but of large size and thus more powerful. The development was conducted between Central Bureau of Sporting and Hunting guns (TSKIB SOO) in Tula, which was responsible for weapon, and GNPP "Pribor", which was responsible for ammunition. Early prototypes were known as TKB-0134, but during late eighties its development stalled due to poor economical situation and general turmoil caused by the dissolution of the Soviet Union.During early 1990s the project was resurrected under the 'Balkan' codename, and its development then dragged on slowly for almost 20years. It seems that this slow development now is almost complete, as recently (summer 2008) GNPP "Pribor", which is now a prime contractor for 'Balkan' project, has demonstrated prototype of the 6G27 40mm grenade launcher and associated 7P39 40mm caseless ammunition during IDELF-2008 military exhibition in Moscow. According to themanufacturer, the Balkan grenade launcher and its ammunition are now undergoing official Army trials and are almost ready for adoption and massproduction. Compared to the current Russian 30mm automatic grenade launchers AGS-17 and AGS-30,the Balkan possess extended maximum range (2,500 meters as opposed to1,700 meters for 30mm guns) and fires heavier grenade which issignificantly more effective.

Reliableinformation about the design of the Balkan grenade launcher is not yet available, but it appears that it shares the basic design of the earlyTKB-0134 grenade launcher, and thus, unlike most other weapons in its class,  is gas operated and uses rotary bolt locking. Balkan uses specially developed 40mm "caseless" ammunition. More properly, the cartridge case for propellant load is integral to the projectile and flies away through the barrel; powder gases emerge into the barrel through four apertures in the base of projectile, as in the small rocket). Since powder gases emerge directly into the barrel, Balkan's firing pin also serves as a gas piston; after the discharge, gas pressure in the barrel forces the firing pin back. Since the firing pinis rigidly connected to the bolt carrier, this causes bolt carrier to retract, and in turn to rotate and unlock the bolt. Once the bolt is unlocked, the bolt group is free to recoil under the residual pressure and accumulated inertia of the bolt carrier. Gun fires from open bolt.Feed is from special disintegrating belts, from right side. Belts are factory-loaded and supplied to troops in special canisters, eachholding two belts with 40 rounds. For combat use, belts are loaded into 20-round drum containers, which are attached to the right side of thegun. Firing controls include dual horizontal spade grips with thumb trigger in the middle, and a large cocking handle on the right side of the weapon. Balkan is equipped with optical sight and also can have back-up iron sights. The standard mounting is a tripod, inherited from AGS-17 and improved with introduction of the gunner's seat at the rear. It is possible that, once adopted, the Balkan grenade launcher will also be installed on various vehicle mountings as well.