PAW-20 grenade launcher, right side. Note that it has dual Picatinny rails whichhost collimating (red dot) sight at left, and a laser pointer at right. 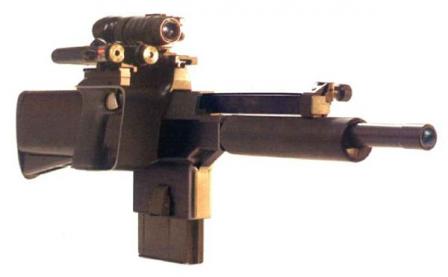 PAW-20 with night vision sight and laser pointer. Note that magazine projectswell below its housing. 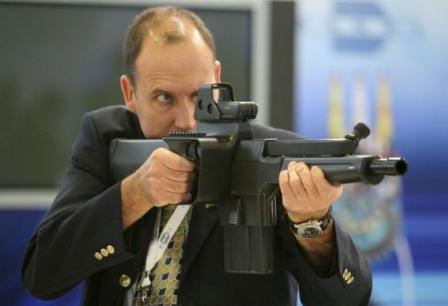 PAW-20 (PAW stands for Personal Assault Weapon) is a most recent development of the South-African company Gemaco Elbree Pty Ltd, and is marketed by South African military corporation DENEL. Ammunition of new type,developed for PAW-20, is produced by the PMP – DENEL munitions. While in some advertising texts the PAW-20 was listed as a "new assault rifle",it is obviously not a true assault rifle, but,rather a semi-automatic grenade launcher, which is intended as an infantry support weapon. PAW-20 fires specially developed explosive ammunition of 20mm caliber, using relatively short, straight cartridge cases. Muzzle velocity is about 300 m/s, which is quite low by artillery standards but rather high by standards of hand-held grenade launchers. Intended targets for PAW-20 are infantry in the open and behind light covers, as well as unarmored or lightly armored vehicles and thin-walled buildings. While maximum effective range for PAW-20 is given as 1000 meters, it is obviously stated for "area"targets such as groups of soldiers; against point targets like cars or machine gun nests, effective range will be much less probably no more than 300-400 meters – unless gun will be used in conjunction with laser rangefinder and computerized sight with built-in ballistic calculator.
Standard ammunition at this time is available in HE, HE-I and TP (practice)variety, with other types being in development. Weight of the round warhead is listed as 105 gram, and it seems that new round consists of a standard 20mmprojectile (as used in aircraft cannons) loaded into short, straight-walled case of 42mm length. All ammunition is point-detonating only, unlike the American XM-25, to which PAW-20 is a direct competitor.

PAW-20 is semiautomatic, gas operated weapon with rotary bolt locking. The entire barrel / bolt group is allowed to recoil within the polymer gun housing forabout 75mm (3"), in attempt to decrease peak recoil down to manageable level. General layout of the gun is somewhat unusual as the pistol grip with thetrigger is located at the right side of the receiver. Gun is fed from detachable box magazines which hold 7 rounds of ammunition. Empty cartridge cases areejected through the window on the left side of the weapon, right in the front of the firer's face. Sighting equipment is installed on two Picatinny-type rails located in parallel at the top of the gun housing. Preferred sighting arrangement seems to be a red-dot type collimating sight, but other sight options also available.