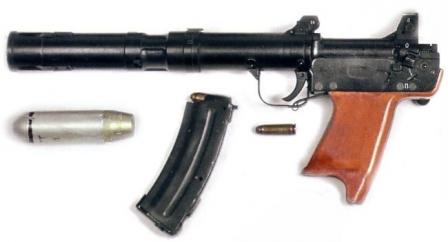 The BS-1 “Tishina” (Silence) grenade launching system is one of most interesting and impressive weapons that were developed for Soviet Spetsnaz (Soviet Army Special Operations forces). This system was adopted in 1970s, to replace previously used stand-alone silenced / flash & noiseless 30mm grenade launchers known as “Device D” and “Device DM“. The idea behind “noiseless”grenade launcher was to hide the sound and flash of the grenade launch and thus give the shooter (and his comrades) more chances to escape after a successful diversion behind enemy lines (main targets for Spetsnaz during the Cold War were tactical nuclear missile launchers, C&C installations and equipment, fuel and ammunition storage facilities and parked tactical aircraft). Original BS-1 system included the 7.62mm Kalashnikov AKMS assault rifle with PBS-1 silencer, subsonic 7.62×39 US ammunition, 30mm GSN-19 under barrel grenade launcher and grenade launching sight. When, during late 1970s, Soviet army switched over to 5.45x39mm ammunition, attempt was made to replace 7.62mm AKMS assault rifles with PBS-1 silencer with 5.45mm AKS-74UB compact assault rifles with PBS-4 silencers. The original GSN-19 grenade launcher was slightly reworked to accept slightly more effective 7G23 grenade. Other changes include different mounting brackets to better suit AKS-74UB compact assault rifles. It must be noted that while AKMS-based “Tishina” system proved to be more or less sucessful, AKS74UB-based “Kanarejka” system proved to me less successful due to low power and effectiveness of the subsonic 5.45mm ammunition.

The GSN-19 silent (flash and noiseless) grenade launcher is unusual in the fact that it is both muzzle- and breech-loaded. The standard projectile is a specially designed AP-I (Armour Piercing – Incendiary) grenade with pre-engraved rifling. The warhead is designed to penetrate hulls of tactical ballistic missile launchers, aircrafts, C&C equipment, and then cause enough damage to render the target inoperative. The grenade has no propelling system in itself. The launch is performed by specialblank cartridges, which are loaded into detachable box magazine(holding 8 cartridges in 7.62mm based version or 10 cartridges in5.45mm based version). Cartridges are fed into the chamber by manually operated rifle-type rotary bolt action mechanism. To achieve the noise-and flash-less launch, blank cartridges are discharged into the limited volume breech, which is fitted with movable telescopic piston at the front. Upon discharge, this piston violently pushes the grenade, loaded into the muzzle part of the launcher, out of the barrel, and then stops and seals the expaning powder gases inside the rear part of the launcher’s barrel. After a short while pressure inside drops to safe level and gun can be reloaded by operating the bolt (to extract spent blank and load a fresh launching cartridge) and then loading the new grenade from the muzzle. Loaded grenade is held in the barrel by special springs. The muzzle velocity of the 30mm grenade for 7.62mm version is quoted as”above 100 m/s”, for 5.45mm version it is listed as 115 m/s. Grenade launcher is attached to special brackets, welded to the host assault rifle. To fire GSN-19 accurately and comfortably, host rifle is equipped with special folding grenade launching sight (attached to the base of standard rear sight) and with removable rubber recoil-absorbing buttpad.