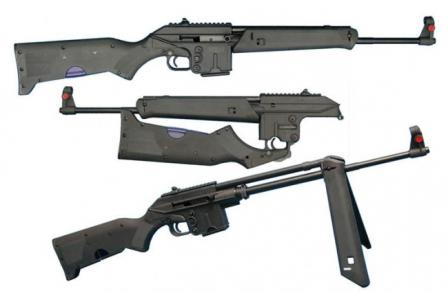 Kel-tec SU-16C rifle in various configurations; note that unlike predecessors it can be fired with butt folded.

The SU-16 rifle (SU stands for Sport Utility) was introduced by American company Kel-Tec CNC Industries Inc in 2003, and today is available in several versions.From the start this weapon was designed as all-around carbine for civilians who might need a compact yet relatively powerful weapon for small game hunting and self-defense. This rifle / carbine also can be used as a survival weapon for tourists, backpackers, pilots and anybody else who might find himself or herself in a variety of 'unfriendly' situation. It also can be used for practice, plinking or even as police weapon. SU-16 rifle has two major features which distinguish it from other 5,56mm / .223 semiautomatic rifles -its folding capability and light weight. A full-size Kel-tec SU-16A rifle can be easily folded to package only 67 cm long, which will fit easily into backpack or automobile trunk. SU-16A and more compact SU-16B rifles also have special storage compartments in buttstock which will hold two spare 10-round magazines or one 20- or 30-round magazine,which is a good feature for bug-out / survival weapon. SU-16C and SU-16D rifles are oriented more toward "active" defense or police use,as those can be fired with the stock folded; furthermore, SU-16D has very short barrels (2 versions available), which makes it good CQB /urban weapon for police or security forces. It must be noted that civilian circulation of such short-barreled weapons can be limited bylaws; for example, in USA rifles with barrels shorter than 16 inches /406 mm are subject to special registration and approval for purchase under the BATF regulation (Class III weapon – Short Barreled Rifle).
According to available information, Kel-tec SU-16 rifles provide adequate accuracy at all practical ranges (up to 200-300 meters), and the most limiting factor in accuracy is that factory sights are very basic in design. However, each SU-16 rifle is provided with integral Picatinnystyle rail on the top of receiver, and thus it may benefit from the installation of low magnification telescope or red dot sight. Reliability is also quite adequate for all intended purposes.

Kel-tec SU-16 rifles are gas operated, semi-automatic weapons which use well-proven long stroke gas piston system, located above the barrel. Barrel locking is achieved by multi-lug rotary bolt which engages the barrel extension,thus relieving polymer receiver from most of the stress. Cocking handle is attached to the bolt carrier, reciprocates when gun is fired and thus can be used as forward assist in the unlikely case of feeding troubles. All Kel-tec SU-16 rifles use Ar-15 / M16 compatible magazines, which are readily available in USA. There is no bolt hold-open device in SU-16 rifles. Manual safety is of cross-bolt,push-button type and is located above the trigger guard; it can be easily adapted either for right- or left-hand users. The key feature of Kel-tec SU-16 rifles is the "break-open" design of the gun,with the trigger unit / buttstock being hinged to the receiver just behind the magazine housing. In "ready to fire" position trigger unit is rigidly held to the receiver by the cross-pin, which can be removed for folding or disassembly by pushing it out with the tip of the bulletor any other pointed object. SU-16A and SU-16B rifles have buttstocks integral to the trigger unit and thus cannot fire when folded. SU-16Cand SU-16D rifles have separated under folding buttstocks which do not interfere with rifle operations when folded. Kel-tec SU-16A andSU-16B buttstocks are hollow at the bottom, and can store two 10-roundor one 20- or 30-round magazine. SU-16C and D buttstocks have no such compartments. Furthermore, forearms of Kel-tec SU-16A, SU-16B and SU-16C rifles are designed to unfold into an integral bipod, which might be useful for firing at extended ranges in the field, especially when using a telescope sight. Forearms of Kel-tec SU-16D carbines are short and of solid design. Standard sights include an adjustable front sight, installed either on the barrel (SU-16A and B) or on gasblock (SU-16C and D), and non-adjustable removable diopter-type rear sight, which is installed on integral Picatinny rail.