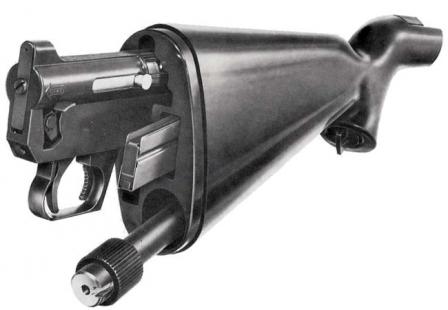 Original AR-7"Explorer" survival rifle, with parts partially inserted into the polymer stock. For compact storage and transportation parts are fully inserted into appropriate compartments in the stock and then closed by detachable rubber buttplate.

Ar-7 survival rifle was developed at American company Armalite(division of Fairchild Aircraft) during late 1950s, with intent to provide suitable weapon for crash-landed or parachuted aircrew members and others who might find themselves in a wilderness survival situation. The basic idea was to design a lightweight weapon, suitable for hunting a small game, which will be insensitive to elements and easily stored in a compact package. It seems that Armalite team succeed in this task, as the Ar-7 rifle is still in production after almost 50 years since its introduction, although now by different company. During 1970s, manufacturing rights for Ar-7 rifle were purchased by CharterArms Co (USA), which produced Ar-7 until about 1990. Between 1990 and 1997 Ar-7 rifles were made by Survival Arms (USA), and today same rifles are produced in USA  by Henry Repeating Arms Co.
Ar-7 rifles are good wilderness companion guns, if you do not plan to face dangerous animals such as wolves or bears. The key niche for Ar-7 is to bring a food to the table of a backpacker or survivalist, through small game hunting. And while low-powered .22LR ammunition is not the best choice for self-defense against human beings (criminals, etc), it is still much better than a pocket knife, stone or bare knuckles – small.22Lr bullet is certainly capable of doing lethal damage to human body. Ar-7 also is a good gun for practice or recreational shooting, as it is inexpensive, fires inexpensive ammunition and can be carried in a compact package to a safe place to shoot withouth getting unnecessary attention.

Ar-7 survival rifle is blowback operated,semi-automatic weapon which fires from closed bolt. Its majost components, including receiver, barrel, bolt group and trigger unit are made from stainless steel. Shoulder stock is made from polymer. Rifleis designed for quick take-down: once gun is unloaded, barrel nut is unscrewed and barrel removed. Receiver is then detached from stock by unscrewing the take-down screw located in the base of the semi-pistolgrip. Once major parts are separated, barrel, receiver and a spare magazine can be stored inside the hollow buttstock, protected by removable rubber buttplate. Feed is using detachable box magazines.Standard magazine capacity is 8 rounds, although magazines of large capacities are available as after-market options. Standard sights include front blade, installed on the barrel, and diopter-type rear on receiver. Current production models can be fitted with telescope sights using special mount.