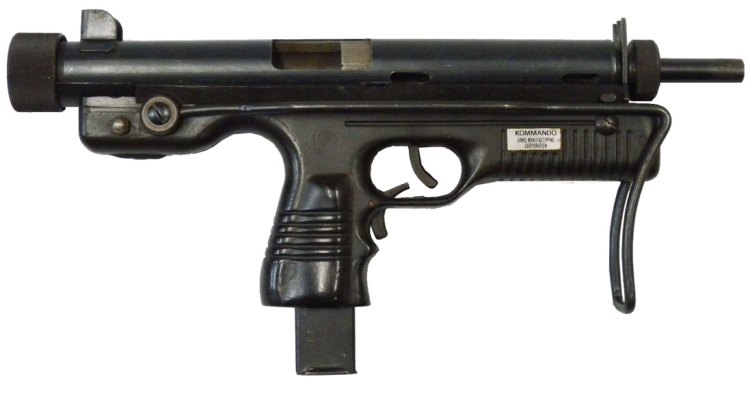 The LDP semi-automatic carbine was developed during mid-1970s in Rhodesia (now Zimbabwe), by gun designer Alex Du Plessis, and initially manufactured by Rhodesian firm Lacoste Engineering Pty. The name LDP stands either for “Land Defense Pistol” or for “Lacoste – Du Plessis”. It was intended as personal defense sidearm for Rhodesian civilians during the period of the Rhodesian war. Once the war was over, manufacture of the LDP carbine was moved to South African republic, where it was made by Kommando Arms Manufacturing Corporation as “Kommando LDP”. Because of its appearance and origin, LDP was sometimes called as “Rhuzi” (Rhodesian Uzi).

LDP Kommando semi-automatic carbine is built using simple blowback action and fires from open bolt. It is patterned after Czechoslovak SA.23 submachine gun, in that it uses tubular receiver and wrap-around bolt. The pistol grip along with trigger housing and forend is made from polymer. Manual safety lever is located on the left side of the trigger housing, above the trigger. Simple grip safety is provided in the form of the trigger-locking lever that must be grasped by the firing hand to allow trigger to be pulled. Shoulder stock is made from steel wire and folds down and forward, so the gun can be fired single-handed if required. Sights are fixed and non-adjustable, with diopter type rear sight. Feed is from double stack, double feed box magazines compatible with Israeli Uzi submachine guns.