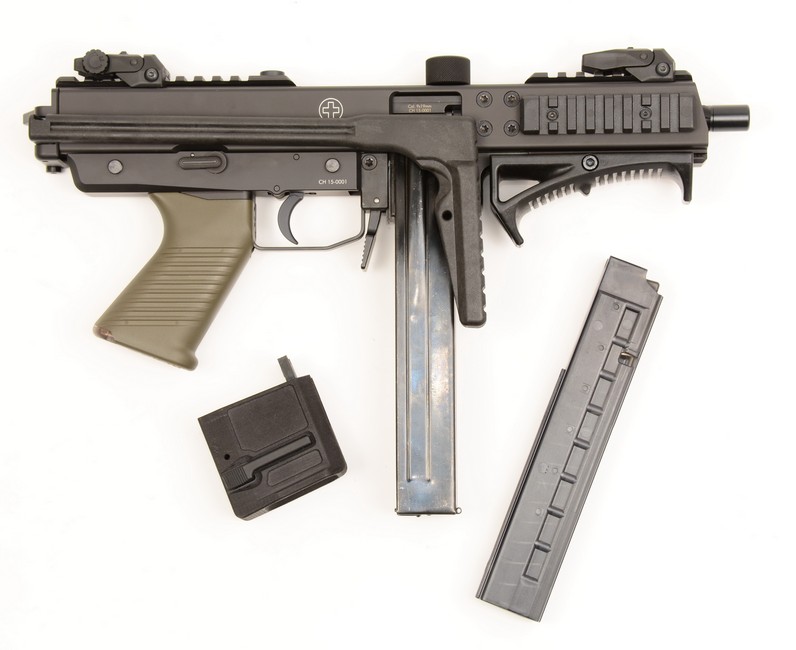 B+T KH9 semi-automatic carbine, with 30-round B+T APC / MP9 magazine and adaptor shown next to the gun

B&T KH9 semiautomatic carbine is one of more unusual weapons developed by well-known Swiss gun-making company B+T AG. It was first presented during IWA-2015 Expo in Nuremberg, Germany. This weapon is intended primary for civilian use, as a sport weapon for LVR (Low Velocity Rifle) competition shooting, as well as for training, plinking and home defense. Same weapon also can be used by private security forces and police personnel, if use of select-fire weapons is not authorized for some reasons. For that reason it is made in semi-automatic only.

The KH9 semi-automatic carbine is designed using simple blowback action and fires from closed bolt. Upper receiver is an extruded aluminum unit. Weapon is fitted with conveniently located ambidextrous safety levers, which also serves as a de-cocker for an internal hammer. This is because the gun is equipped with Double Action (DA) trigger system, quite common in handguns but rather unusual for carbines. The weapon is fed is from 50-round four-stack box magazines, which were originally developed for Finnish Suomi submachine guns shortly before WW2. Suomi SMGs were produced in Switzerlandunder license as Hispano-Suiza MP 42/43, and, apparently, there still are some stocks of surplus Suomi magazines to be used with KH9. The gun also comes with an indigenous magazine adaptor that permits use of B&T standard plastic box magazines. These are the same magazines as used with B&T MP9 submachine guns and APC9 family of pistols and carbines. Furniture includes side-folding stock. Top of upper receiver is provided with integral Picatinny rail. Additional Picatinny rails are provided on the sides and on the bottom of receiver.