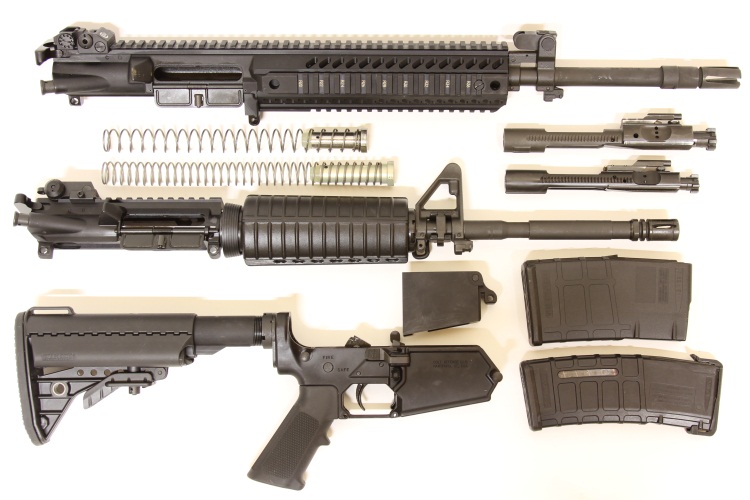 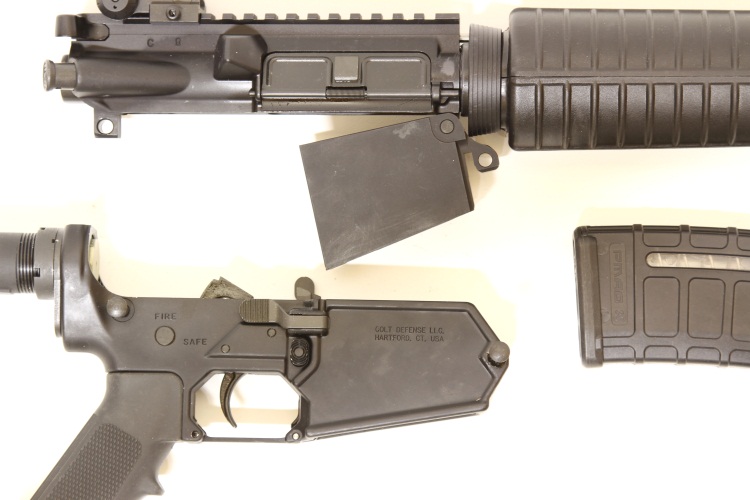 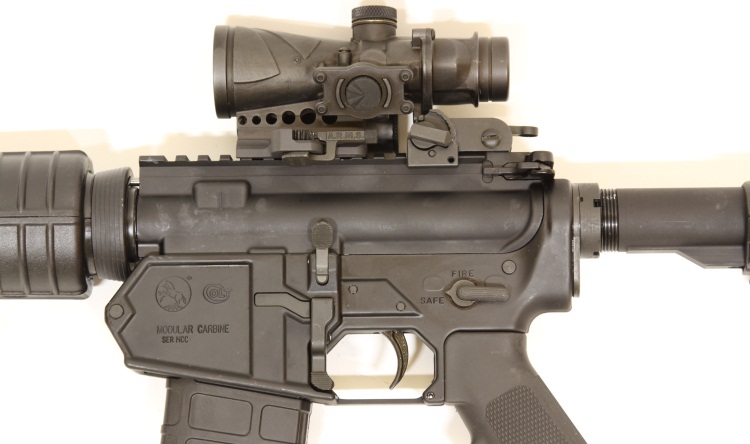 Colt LE901 modular semi-automatic carbine is a recent development of the famous American small arms making company Colt. It is built for civilian and law enforcement use, to provide shooters with weapon that has familiar AR-15-style ergonomics and handling but can be easily converted between two most popular rifle calibers – 7,62×51 / .308 Winchester and 5,56×45 / .223 Remington. The 7,62mm caliber option offers longer range and better terminal effectiveness at the cost of greater weight, more pronounced felt recoil and limited magazine capacity (usually 10 or 20 rounds). The 5,56mm caliber offers shorter effective range, mild felt recoil, bigger magazine capacities (up to 100 or even 150 rounds in any AR-15 compatible magazine) and decreased costs of ammo. Due to modular nature of the weapon, other calibers could be easily incorporated into the design.

The key to modular design of the Colt LE-901 semi-automatic rifle is an evolution of the original two-piece receiver design, patented in 1950s by Eugene Stoner for Armalite Ar-10 and Ar-15 rifles. Colt bought these patents from Armalite in 1959, but until recently produced only smaller Ar-15 type rifles, originally designed for 5,56×45 (.223 Rem) ammunition. The Colt LE-901, on the other hand, is originally built to handle bigger 7,62×51 / .308 Win ammunition, but can be easily converted to accept smaller Ar-15 magazines and upper receiver assemblies chambered for 5,56 / .223 and other platform-compatible rounds.

Colt LE-901 semi-automatic rifle in its basic .308 caliber configuration consists of two major components, both based on the proven Ar-15 concept but of proprietary dimensions. These components include lower receiver with Ar-15-type trigger group and .308-sized magazine housing, and .308-sized upper receiver with monolithic rail handguard, 7.62mm / .308 caliber barrel, special return spring. Proprietary bolt group consists of a .308-sized bolt with bolt carrier that has reduced diameter of the rear part of the body to fit into Ar-15 (.223 cal) size buffer tube. Assembling of these two components with two cross-pins, set into the lower receiver, will result in a handy .308 caliber rifle / carbine. To change the caliber of the Colt LE-901 to 5,56mm / .223 Rem one has to have any AR-15 type complete upper receiver (with barrel and bolt group) in specified caliber, standard M4-type return spring and a proprietary patented magazine adapter. Conversion starts by removing the complete .308 Colt upper and .308 return spring. Once the .308 upper is removed, the magazine adapter, which is supplied with each carbine, is attached to forward mounting point of any Ar-15 compatible “Mil-Spec” upper receiver, using captive cross-pin on the adapter. Once attached to the upper receiver, the adapter is slid from the top into the magwell of the LE-901 lower receiver. When fully seated, magazine adapter / .223 upper receiver combo is rigidly attached to the lower receiver by two cross pins on the lower, which enter respective mounting holes at the rear of the upper receiver and at the front of the adapter.

Once this conversion is complete, one can use any standard Ar-15 compatible magazines to feed the converted carbine with 5,56mm / .223 ammo. The entire conversion process requires no tools and takes no more than couple of minutes and, if required, can be done “in the field”.

The basic Colt LE-901 rifle is gas-operated, semi-automatic weapon with Stoner-designed direct gas impingement system and rotary bolt locking. It uses aluminum alloy upper and lower receivers, connected by two captive cross pins. Use of the flat-top monolithic upper receiver / handguard assembly allows for installation of wide variety of sights (iron, red-dot and/or telescope) which would keep their zero after conversion to other calibers. Rifle features ambidextrous controls, including magazine release and bolt release buttons replicated on either side of the gun. Standard configuration of the .308 caliber upper includes 16.1 inch free-floated barrel with flash hider. In its basic .308 / 7.62mm version, the LE-901 carbine is fed using 20-round Knights SR-25 or PMAG 20LR magazines. Converted, Colt LE-901 might sport almost any Ar-15 type “Mil-Spec” upper receiver with different barrel lengths, profiles, handguard configurations etc. Converted magazine housing would accept any Ar-15 compatible magazines, from short 5-rounders and up to 60- and 100-round quad-stacks and 100- and 150-round twin drums.