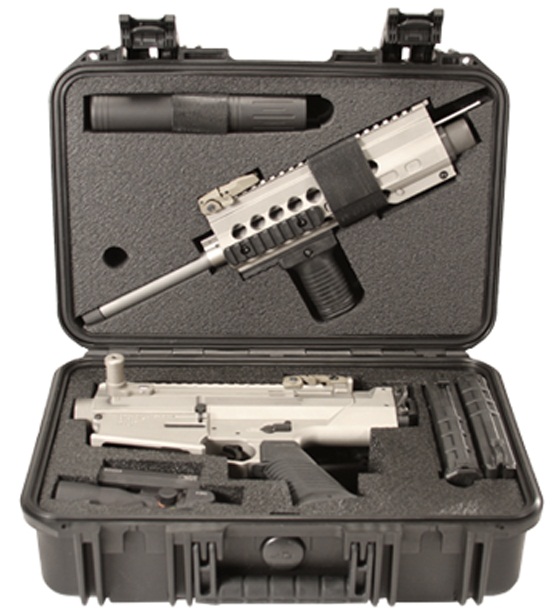 The 7.62mm Paratus carbine was designed by Swetal “Skip” K. Patel, who previously designed a line of modular AR15-based rifles for Cobb Manufacturing Co, now owned by Remington / Bushmaster. At the present time Mr.Patel runs small company DRD Tactical, which manufactures the Paratus rifle. The Paratus rifle was originally developed to meet solicitation issued in 2011 by US Joint Special Operations Command for “clandestine breakdown sniper system”. At the time of this writing (January 2012) it is not yet known, if Paratus rifle is, or will be submitted to US SOCOM trials.  However, it is already available for civilian and LE sales in USA in several versions. The 5.56mm version of the Paratus (compatible with standard AR15-type lower receivers) is said to be in the works.

The 7.62mm Paratus rifle is designed to be stored and carried unobtrusively and without undue attention inside small package such as a briefcase or everyday carry bag, and then, when required, quickly assembled and brought into action, providing its user with range and firepower of conventional semi-automatic rifle firing 7.62×51 / .308 Win ammunition.

The name of carbine, “Paratus” is a Latin word which means “Ready”.

The 7.62mm Paratus rifle / carbine is gas operated, semi-automatic weapon broadly based on AR10 / AR15 system. Its upper and lower receiver halves are made from aircraft-grade aluminum alloy.

Paratus rifle uses Stoner-designed direct impingement gas system, with extended gas tube running above the barrel. Gas system is equipped with 3-position manual gas regulator. The rotary bolt with seven radial locking lugs and cam / pin rotation arrangement is also similar to that of AR10, although the bolt carrier and return spring are different. The bolt carrier is much shorter than typical AR10-style component, and has an inverted U-shaped bracket installed above its gas key. This bracket is used to act against the low diameter captive return spring, which is located around guide rod that runs above the bolt carrier. Complete return spring / spring guide assembly is contained in the upper receiver, allowing for conventional folding shoulder stock to be used on the rifle. Non-reciprocating charging handle is located on the left side of the upper receiver.

Another difference from conventional AR10 / AR15 style rifles is quick detachable barrel and forend system. Barrel (which is made by Lothar Walther) is equipped with screw-on barrel nut and indexing stud. To install the barrel into the receiver, one simply has to insert the barrel into the front of receiver until it is indexed properly and its gas tube entered into the receiver. Then barrel nut is firmly screwed onto the receiver by hand, until barrel is properly fixed. The removable forend with integral rail system is made from aluminum alloy and features squeeze-clamp at is rear, where it seats on the barrel nut. To install the forend, one has to slid it over the barrel until it stops against the front of the receiver, and then fix it there using cam lock. As of now, Paratus rifle can be equipped with free-floated barrels of variable lengths, including 12 inches (which is regulated by NFA’34), and 16, 18 and 20 inches. Paratus rifle barrels are equipped with muzzle brake and/or quick-detach sound suppressor (silencer). Controls of the Paratus rifle are similar to that of most other AR10 / AR15 type rifles, including the trigger unit parts, which are compatible with AR15 platform. Paratus rifle is equipped with adjustable, side-folding shoulder stock originally developed for Remington / Bushmaster ACR rifle. Sighting options include Magpul back-up iron sights, installed on the top Picatinny rail, and any optical sight of user’s choice, installed on the same rail. Additional accessory rails can be mounted on the removable forend according to user preferences. Rifle is fed using 20-round detachable box magazines compatible with Knight’s SR-25 rifles.