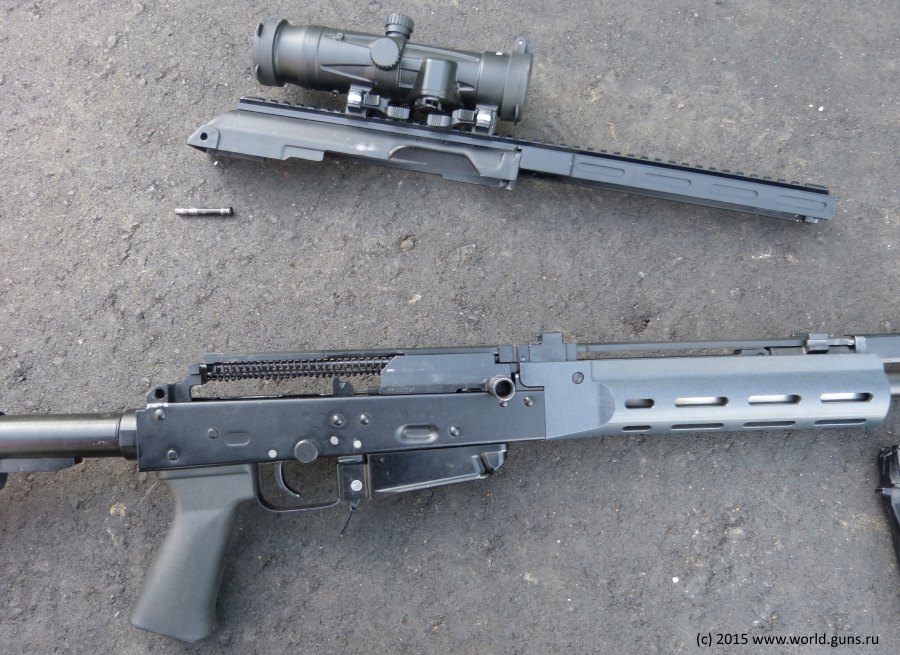 Kalashnikov Saiga MK-107 semi-automatic carbine. Top cover is removed, bolt group is locked back by bolt hold-open device, counter-weight is all the way to the front. Both returns springs are fully compressed.

Kalashnikov Saiga MK-107 semi-automatic carbine. Top cover is removed, bolt group is locked back by bolt hold-open device, counter-weight is all the way to the front. Front gas piston cover is removed to show T-shaped two-way gas block at the fronn of the forend, and two gas pistons in their extreme recoil positions.

Kalashnikov Saiga MK-107 semi-automatic carbine. Manual cycling of the action to show how the bolt group and its counter-weight are synchronized.

The Kalashnikov SR1 rifle, previously known as Saiga MK-107, is a semi-automatic rifle intended primary for sport shooters practicing sports like IPSC, IDPA and 3-Gun. In all these disciplines, speed and accuracy are of equal importance, and Kalasjnikov SR1 (Sport Rifle, model 1) is intended to provide sport shooters with carbine that allows for very fast recovery from recoil of each shot, allowing for fast and accurate double-taps or longer strings of rapid and precise semi-automatic fire.

Saiga MK-107 was conceived by IZHMASH factory (now an essential part of the concern Kalashnikov) in 2012 as a semi-automatic version of the abortive AK-107 assault rifle, which featured balanced action. After several years of tests and developments, SR1 is scheduled to enter mass production in 2018. It will be available for Russian shooters under the same “hunting rifle” license as other semi-automatic rifles of the Saiga family; it also will be offered for export.

Kalashnikov SR1 (Saiga MK-107) is a semi-automatic gas operated rifle with recoil-mitigating balanced action. This means that rifle features two gas pistons, entering single bas block above the barrel from opposite directions. Rear gas piston is attached to the bolt carrier group. Forward gas piston (which moves opposite to the rear one) is attached to a sliding counterweight, located above the bolt carrier group. Both counterrecoiling masses are synchronized by a pair of rotating gears, so after each discharge rearward and forward movement of the bolt group is balanced by a counter-moving mass attached to the forward gas piston, effectively cancelling impulses generated by heavy reciprocating parts. As a result, rifle generates less felt recoil and is much easier to hold on target in rapid fire. Bolt locking is achieved by a conventional “Kalashnikov style” rotating bolt with two locking lugs that engages the barrel trunnion pinned inside the stamped steel receiver. Reciprocating charging handles are attached to the bolt carrier at either side of the gun. Dual return spring arrangement (one for the bolt carrier and another for the counter-weight) completes the setup. Top cover is made from stamped steel, with long Picatinny rail permanently attached on its top. Rifle is equipped with adjustable M4-carbine style telescoping shoulder stock and polymer  forend. Rifle features cross-button manual safety above the trigger guard, bolt hold-open device with release lever located on the left, above the magazine catch, and a magwell for faster magazine reloads. Production version of the Saiga MK-107 rifle utilizes Ar-15/M16 type magazines.