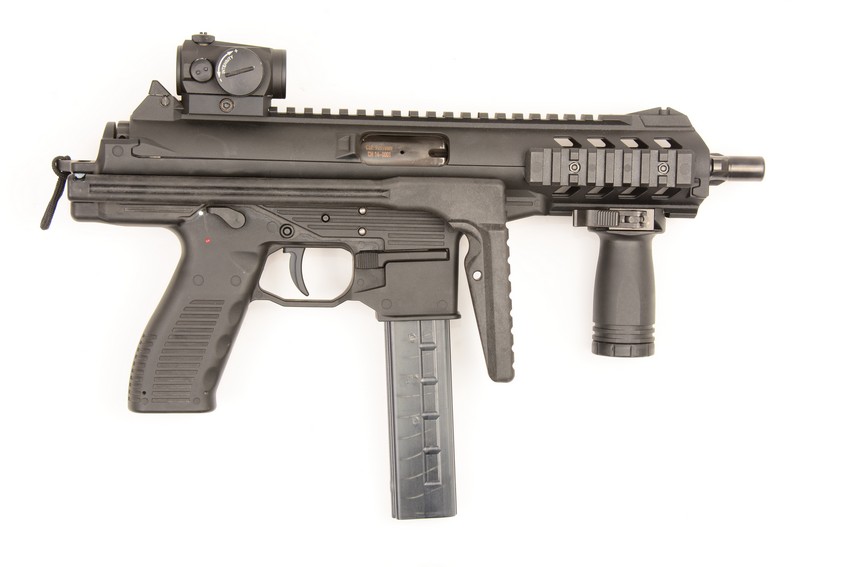 B&T P26 semiautomatic carbine is a new product of the innovative Swiss gun-making company B&T AG in Thun. It was first presented during IWA-2015 expo in Nuremberg, Germanyand was met with much interest. It is scheduled for release by mid-2015 and pre-orders are quite strong. This weapon is intended primary for civilian use, as a sport weapon for LVR (Low Velocity Rifle) competition shooting, as well as for training, plinking and home defense. The same weapon also has a market for private security forces and police personnel, when use of select-fire weapons is not authorized for some reasons. The P26 is purposely designed as a more affordable counterpart to already popular 9mm B&T APC carbines. The niche for this product is for those who want a weapon of a true Swiss pedigree but for some reason don’t have the budget resources to purchase premium guns such as the APC-9. It is produced in semi-automatic version only.

The P26 semi-automatic carbine is built using simple blowback action with indigenous recoil-reducing buffer system. It fires from closed bolt and the bolt will stay open after the last round is fired. It features alloy receiver tube that is covered with lightweight polymer material that will not rust and withstand a lot of hard handling. P26 carbine is fitted with ambidextrous safety levers and magazine release so left-handed shooters are accommodated. The weapon is fed from double-stack box magazines, compatible with B&T MP9 submachine guns and APC9 family of pistols and carbines. Furniture includes side-folding stock. The adjustable sights are integrated into the top of receiver as a standard feature. Top of upper receiver has a molded Picatinny rail for the installation optics. Additional Picatinny rails are provided on the sides and on the bottom of the barrel jacket for lights and hand grips.