Another SKS, with removed bayonet. 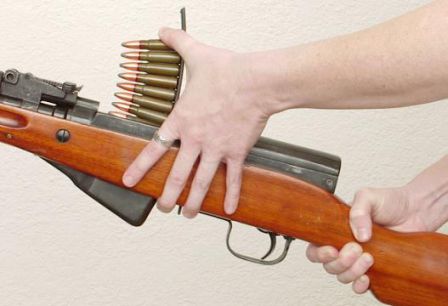 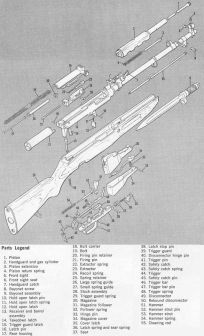 The experience gained during the first part of the World War 2 showed some deficiencies of the existing rifles, both manually operated and semi-automatic. Those rifles were too long and heavy, and fired too powerful cartridge that had excessive recoil and effective range of about 2000 meters, while most fights were at distances of no more than 600-800 meters. From this experience arose the idea of the more compact firearms that will fire cartridge of intermediate power, allowing for effective range of about 500-800 meters or so. This concept was caught by both Soviets and Germans, and while Germans concentrated on only one type of such weapon, an MaschinenKarabiner, that latter became a SturmGewehr, or Assault Rifle, Russians were set up to build a whole family of infantry weapons, designed around newly developed M43 7.62x39mm cartridge. This family included following guns: lightweight bolt action carbine – an idea that never left the prototype stage; a self-loading carbine; a select-fire assault rifle; and a light machine gun – squad automatic weapon. As said above, military bolt action in 7.62×39 was never proceeded further than prototype stage. Assault rifle became the famous Kalashnikov AK-47. Squad automatic became the Degtyarov RPD. And self-loading carbine became the Simonov SKS.

The SKS (Samozaryadnyj Karabin Simonova = Simonov Self-loading Carbine) was designed by famous Russian arms designer Simonov, who already designed the self-loading rifle AVS-36 and an anti-tank rifle PTRS. First prototypes were built in the early 1945, and were tested in small numbers on the front against Germans. In consequent years both SKS and the cartridge were refined and in 1949 this carbine was officially adopted by the Soviet Army as an "7.62mm Samozaryadnyj Karabin Simonova obr. 1945 goda – SKS". SKS was brought into service along with the Kalashnikov AK-47, and was widely used during the first two or three post-war decades. With the increased numbers of the AK-47 and AKM brought into service, numbers of the SKS in the front-line services gradually declined, but some SKS were still used by non-infantry and second-line units of the Soviet Army as late as 1980s and even 1990s. At the present time most army stocks of SKS are in storage or sold as surplus on both domestic and foreign markets, and the most notable role of the SKS is that it is still used as a ceremonial weapon by the various Russian Honor Guards.

As with many other soviet weapons of the post-war period, the licenses to SKS design were sold or given to some Soviet-friendly countries, such as China, DDR (East Germany), Yugoslavia, Albania and some others. These countries also built vast numbers of SKS with some minor derivations from original design. So, Chinese SKS featured spike-shaped bayonets instead of original blade-shaped ones. Yugoslavian SKS carbines often were equipped with combined muzzle device – rifle grenade launcher, grenade sights and a gas cut-offs. Other variations also existed. Many off those carbines, along with the original Russian ones, were sold as a military surplus during the last decades, either in the original for or in the "civilized" form, with bayonets removed. Cheap prices of both carbines and 7.62x39mm ammunition added to a popularity of SKS on the civilian markets. Being a sound, but outdated military design, SKS is a great all-around civilian arm, capable of numerous functions: small and even a medium game hunting, plinking, home defense. Wide variety of aftermarket accessories (stocks, sight mounts, sights, large-capacity magazines, bipods etc etc) only helped to keep this neat gun on the market.

SKS is a gas operated, magazine fed, self-loading weapon. It utilizes a short-stroke gas piston with its own return spring, and a tilting bolt locking, where a bolt tips down to lock onto the floor of the receiver. Charging handle is attached to the right side of the bolt carrier and moves when gun is fired. Receiver is machined from steel. SKS is fed from the integral 10-rounds magazine, which could be loaded from the top through the open bolt by loose cartridges or by using special 10 rounds stripper clips. Stripper clip guides are machined into the front of the bolt carrier. SKS features a bolt catch device, an essential feature for any clip-loaded firearm. Magazine can be safely and quickly unloaded via swing-down opening magazine cover. SKS is a hammer-fired gun. Safety switch is located inside the triggerguard. SKS features a single-piece wooden stock, a hooded post-type front sight and a range-adjustable open rear sight. Military-issue SKS carbines are equipped with non-detachable bayonets, that could be folded down and backward when not in use. Soviet, East German and Yugoslavian carbines use blade-shaped bayonets, Chinese Type 56 carbines use spike-shaped bayonets, which are slightly longer than blade-shaped ones.

In general, the SKS is an excellent all-around weapon that offers slightly longer range and better accuracy than Kalashnikov AK-47, but, for military use, lacks the magazine capacity and selective-fire capabilities. But for civilian use it's still hard to beat, especially when it comes to the cost/effectiveness issues.