Lee-Enfield Mk.1 rifle – the original “Long” Lee-Enfield, made in 1900. Note the dust cover on the bolt, magazine cut-off and lack of the rear receiver bridge with its charger clip guides.
image by Kristopher Gasior of the www.CollectibleFirearms.com

Pre-1916 Lee-Enfield volley sight (at left the “volley” front sight, mounted on the left side of the stock, just ahead of the traditional rear sight. At right – the diopter rear “volley” sight, mounted alongside the safety on the receiver) left image by Alan Blank. 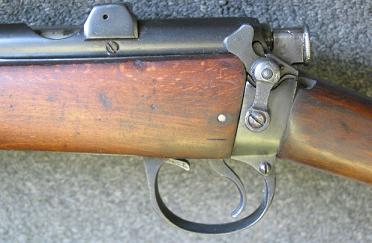 Safety switch on the SMLE Mk.III* (note the absence of the “volley” rear sight) image by Alan Blank. 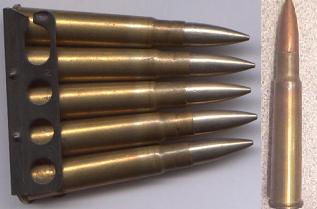 .303 British cartridge with Mk.VII bullet in charger clip and alone.

The SMLE is a manually operated, rotating bolt action magazine fed rifle. The Lee-designed SMLE magazine is a first easily distinguishable feature. It holds 10 rounds of ammunition in staggered column form, and while the magazine itself is detachable, it is not intended to be reloaded when detached from rifle. Early Lee-Enfields (Long Lee-Enfields and SMLEs prior to Mark III) were loaded only by single rounds via the top receiver opening. Latter, the clip (charger) loading was introduced, and a rear receiver bridge with charger clip guides was added to the design. Some of the earlier marks were then retrofitted with charger loading ability during the 1907 – 1910. To load the magazine, one must use two standard 5-rounds clips. Loading by loose rounds was still available, but some care must be taken when loading cartridges into clips or in the magazine, due to the rimmed ammunition cases. Prior to the 1916, all SMLEs (and earlier Long Lee-Enfields) were issued with so called “magazine cut-off” – a simple device, located at the right side of the receiver and intended to cut off the cartridge supply from magazine to the action when engaged, so rifle could be used as a single-loader, and ammunition in the magazine could be saved for the hottest moments of combat. This was an outdated idea even when it was first introduced, so it was easily discarded when the need to speed up production arose. The magazine itself should be detached only for cleaning, maintenance and repair, and every rifle was issued with only one magazine. The magazine catch is located inside the triggerguard.

The bolt action, another invention of the James Paris Lee (along with magazine), is the other most famous feature of the SMLE. The rotating bolt has two lugs that lock into the receiver walls at the rear part of the bolt, thus saving some part of the bolt length and bolt pull, when comparing to the forward lugs locking. This shorter bolt pull, along with charging handle, located at the rear part of the bolt and bent down, lent itself to quick reloading. Add a relatively high capacity magazine with fast clip reloading and here you have one of the fastest practical rates of fire along with contemporary designs. The SMLE was a striker fired gun, with cocking on the bolt close action and a dual-stage trigger. The bolt head with the extractor was a separate, non-rotating unit, screwed into the bolt body. The safety was located at the rear left side of the receiver and was easily operated by the firing hands’ thumb finger. One notable feature of the Lee bolt action was that the bolts were not interchangeable between different rifles of the same mark Each bolt must have been fitted to its respective action, thus making the production and in-field bolt replacement more complicated. The insufficient headspace problem on the pre-No.4 SMLEs was solved my manual sandpapering the respective bolt-head, and since the No.4 rifle, there were 4 standard sizes of the bolt heads, from which armourer could select one, most suitable for the particular action.

The sights of the Mark III / No.1 Mk.3 SMLEs were a combination of the barleycorn front (an inverted V-shape) and V-notch adjustable rear sights, mounted on the barrel. The front sights were protected by the two “ears” on the stock nose-cap. Latter the front sight were changed to post type, and the rear – to the U-notch type, and since the introduction of the No.4 rifle the barrel-mounted open rear sight was replaced with peep-hole one, mounted on the receiver, which made the sighting line much longer and improved the long-range accuracy. Sniper No.4 Mk.1(T) rifles, made during the WW2, were equipped with detachable optical scope mounts at the left side of the receiver. The scope was carried in the separate box when not in use. No.4 Mk1* rifles, made during the WW2, were equipped with the simplified, two position aperture (peep-hole) sights, marked for 300 and 600 yards ranges only. Pre-1916 Lee-Enfields were also equipped with interesting device, called the “volley” sights. This device was mounted at the left side of the stock, ahead of the magazine, and was used to provide an indirect fire capability at the ranges from 2 000 and up to outstanding 3 900 yards (1800 – 3550 meters). While the individual marksmanship at such ranges with rifle was a nonsense, the salvo firing by large squads at the distant and large targets (such as tight infantry or cavalry formations) can do some damage to the enemy. This was, obviously, an idea of the pre – machine gun and pre – light artillery period, and it was happily dropped during the WW1.

The famous by its distinguishable shape stock of the SMLE featured a semi-pistol grip, a steel buttplate with a trapdoor and a compartment in the butt for tools and cleaning equipment. The “flat-nosed” forend covered the barrel up to the muzzle, and has a small stud, protruding forward under the muzzle for bayonet mounting. Most SMLEs have a small brass disc inset into the right side of the butt, which was used for regimental markings (unlike the German Mausers, where the similar steel disc was used as a bolt unit disassembly tool). The conventional sling swivels were mounted on the frond handguard band and under the butt. Mk.4 No1.(T) sniper rifles also featured an additional wooden cheek rest on the top of the butt for more comfortable sighting while using the scope.

In general the SMLE were ones of the best bolt action battle rifles, fast-firing, powerful and reliable. While being less suitable for “sporterizing” than Mausers, they are still popular among civilians as a hunting and plinking weapons, and also as a part of the history. The key deficiencies of the SMLE were probably the rimmed ammunition and non-interchangeability of bolts, but the advantages of this design were mush bigger and Lee-Enfields in all its guises served the Britain and the British Commonwealth for more than 60 years in the front line service and much longer as a specialized weapon (training and sniper).