British Enfield .303 caliber P14 rifle, made in the USA by Winchester. Note the typical British brass disk with regimental numbers set into the buttstock.
image by Frank Rodyns, Belgium 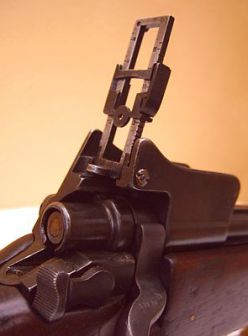 The Pattern 14 (P14) Rifle, US designation M1917 Rifle is one of the first standard rifles to be used in the sniper role in modern warfare. It also emerged as one of the finest Sniper rifles of either side during WW1.

In the earliest part of the 20th century, the British Army had some doubts about the effectiveness of its newest infantry weapon, the famous Rifle, Short, Magazine, Lee-Enfield, or  abbreviated: SMLE. Because of these doubts, the government arms factory at Enfield Lock was set up to produce a Mauser-pattern rifle and new rimless ammunition for it. By the year 1912, such a rifle was produced in the form of the Enfield P13 (pattern 1913) rifle, alongside powerful magnum-class .276 Enfield ammunition.

Being too powerful, this cartridge produced excessive muzzle flash and recoil, and wore barrels out too quickly. The Great War (WW1) effectively stopped the development of a new cartridge, and also put the British troops into desperate need for more and more rifles. As British industry had no spare capacity to produce Lee Enfields, in 1915 the British Government decided to order rifles from private US contractors.

The P13 rifle was especially suited for rapid mass production, so it was ordered for British troops, rechambered for the standard British .303 ammunition. The .303 caliber – now ‘P14’ rifles were manufactured by the three major US arms plants, Remington, Winchester and Eddystone (a subsidiary of the Remington).

As the USA entered the 1st World War in 1917, it immediately experienced a shortage of infantry rifles. Similar to the British before them, US government plants were unable to turn out enough Springfield M1903 rifles for US troops. As the .303 caliber P14 rifles were already in production in the USA, the US Government decided to adapt this pattern to the US issue .30-06 ammunition.

The resulting rifle was adopted as “US Rifle, .30 caliber, Model of 1917“, and produced by the same three manufacturing plants between 1917 and 1918. During that short time, more than two million M1917 rifles were delivered to the US Army, and most of the American troops in Europe were actually armed with M1917 rifles. Nevertheless, after the end of the war the Army officials decided to keep the Springfield M1903 as their general issue rifle, probably as a matter of a national pride. Many of M1917 rifles were sold as surplus or put into storage.

During the early part of WW2 some of the M1917 rifles were shipped to Britain, where they were issued to the Home Guard. To distinguish .30 caliber US-made M1917’s from the very similar .303 caliber P14 rifles; British-issue .30 caliber M1917 rifles were marked with a painted red stripe on the buttstock. The British rifles have a brass disk set up into the right side of the butt, which carries the regimental number. US rifles have no such disk.

In general, M1917 rifles (also known as US Enfields) are regarded as strong and accurate rifles. Many of these were later repurposed as sporting firearms and were often rechambered for various hunting calibers.

The P14 and M1917 are manually operated, rotating bolt action rifles. A Mauser-type rotating bolt has two frontal lugs which lock into the receiver ring, providing better accuracy. This is opposed to the SMLE, which carries rear sited lugs, gaining better reliability.

An integral staggered-row box magazine holds five rounds and can be loaded using M1903-type stripper clips or loose rounds. Bolt handle is bent down for more comfortable carry, and located at the rear of the bolt. A solid rear receiver bridge has guide slots for stripper clips, and serves as the base for a rear diopter sight.

A manual safety is located at the right side of the receiver, above the trigger guard. The adjustable diopter rear sight offered high accuracy, and a telescopic sight was often carried separately and fitted before use. These sights had vertical post and horizontal line type sights. M1917 rifles were issued with detachable M1917 knife bayonet and scabbard.

It should be understood that the P14 / M1917’s reported ‘high accuracy’ is relative to the times it was in service. American servicemen who used this weapon during WW1 were expected to acheive 3 MOA groups at 100 yards. By today’s standards it sounds pretty rudimentary, but in the context of the development of sniper tactics and the technology available in WW1, it was very good indeed.

Generally considered to be the first ‘Sniper text’, Herbert W McBride’s book ‘A Rifleman Went to War’ describes his service with the P14 Rifle, during the development of modern sniper tactics. McBride was an American, who signed up with the Canadian Army in order to take part in WW1 in 1914.